Buster, The Dogcatcher, and Reggie

Leaves the junkyard with the other Junkyard Dogs and goes to live with a family along with Scratchy.

"Look here, you guys. I say we got a new recruit!"
"Oh, sure. There was dogcatchers."
"They say when the wind blows, you can still hear the Tramp howl."
Sparky is a minor character in Lady and the Tramp II: Scamp's Adventure, sequel to the 1955 film. He is one of the members of the Junkyard Dogs.

Sparky is an old-timing Junkyard Dog who appears to have some spunk left in him. He is an Irish Wolfhound with light gray on his mustache and eyebrows.

Sparky used to know the Tramp, or so he says. He doesn't do much else, other than tell Scamp tales about his father. They weren't true, of course, but Sparky seems really into story-telling. He eventually leaves the junkyard with the other Junkyard Dogs minus Buster, and gets adopted by a family along with Scratchy. 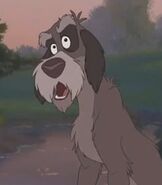 Sparky howling with the other Junkyard Dogs

Sparky and the other junkyard dogs with their new owners
Add a photo to this gallery
Retrieved from "https://disney.fandom.com/wiki/Sparky_(Lady_and_the_Tramp)?oldid=4054014"
Community content is available under CC-BY-SA unless otherwise noted.