Disney Wiki
Register
Don't have an account?
Sign In
Advertisement
in: Article of the week, Characters, Disney characters,
and 17 more

Being agitated or captured

Experiments (cousins)
Sparky, A.K.A. Experiment 221, is an illegal genetic experiment created by Jumba Jookiba and a character in the Lilo & Stitch franchise. He is the first experiment to be activated and rehabilitated, and first appeared in Stitch! The Movie. He is designed to create crippling electric surges. His one true place is powering Kilauea Lighthouse, which had been previously abandoned for years due to requiring too much electricity.

Experiment 221 was the 221st genetic experiment created by Jumba with Hämsterviel's funding. He was designed to use his electrical abilities to create crippling electric power surges. 221 and the other first 624 experiments were deactivated and smuggled to Earth by Jumba during his mission to capture Experiment 626.

Like his cousin Stitch, Sparky is shown to be highly mischievous. He is very hyperactive and fun-loving. He also shares Stitch's habit of picking his nose with his tongue. Sparky was once a very bad and mischievous experiment, as he was programmed into his very being by the alien mad scientist Jumba Jookiba. His original purpose was to cause massive, electrical surges that would disorientate those that were caught in it, but he changed when he was caught and reformed shortly after his activation.

After his short reformation, Sparky was turned good. Overall, he is friendly, though he's quite cautious in new places. He also still holds a mischievous side to him, and although he is a good genetic experiment, he sometimes can't help but mess with electronics and machines.

Sparky holds his ʻohana—a word that another experiment (Stitch) and a little girl (Lilo) taught him—very close (ʻohana meaning "family" in Hawaiian). He will help his family and friends whenever they need a hand, and though he might get into an argument with them occasionally, he is not one to turn down a cry for help.

Sparky looks like a bi-pedal mutated cross between a koala, sloth, Chinese dragon, and gecko. He has light yellow fur and a pale yellow chin, stomach, and mouth. He has a small body, small, short, hollow, round but triangular ears at the sides of a large, narrow, oval-shaped head, and big dark blue eyes. He has a round brown nose, a large wide mouth, and two long forked antennae that protrude from the sides of his muzzle. His arms are skinny with a brown pad-mark in the center of each paw. His legs are stubby and he has a long, bent, slightly twisted tail in a Z-shape with a pointed brown tip. He has a set of large flat jagged teeth, and the inside of his mouth is a blue color with a turquoise tongue.

When he turns himself into an electrical current, the lower half of his body turns into a streak of electricity, making himself somewhat resemble an Asian dragon.

In this form, he has a stronger electrical dragon-like appearance, and will closely resemble a dragon when flying as well, with a scratchy alien voice.

Sparky can turn his body into an electrical current, allowing him to fly or travel through electric-powered generators, appliances, devices, outlets, power lines, machines, and other similar things. Another electrical current is generated between the two long antennae on his head, which can be used to create crippling electrical surges, send jolts towards foes, or when he gets irritated, annoyed, or is pulling pranks. He can also shoot lightning blasts from his antennae and generate and release massive discharges of electrical energy. It is shown that he likes eating batteries.

Originally designed to short-circuit electric-powered devices, Sparky can also use these electrical currents to power machines, lights, and such. Like his "cousin" Stitch, he has a second pair of retractable arms at his side, though he rarely uses them. His short body can extend into a large streak of a tail as he moves through the air at high speeds, his body shining with electricity. Also, like Stitch, he can climb onto walls, hang from ceilings, and see in the dark.

Sparky can speak broken English. He can also speak Tantalog, which is his original language. What he says seems to have a distinctive "buzz" to it (Example: "Cuz-z-zin…", which is how he says "cousin").

Sparky cannot pass through non-conductive objects and obstacles, which allowed Lilo to trap him in a vase.

Lilo and Stitch activated 221's pod in the bathtub (whose faucet served as a handy water source) so he could recharge Jumba's ship in order for them to rescue Jumba, who had been kidnapped by Gantu. However, 221 had other ideas, and after destroying the house's power supply, he then escaped onto the island.

221 managed to evade capture while short-circuiting some portions of Kokaua Town until he attacked the Birds of Paradise Hotel, where Lilo and Stitch were able to capture him by trapping him in a glass vase.

Lilo and Stitch took 221 back to their house, where the latter and Stitch discovered from their interaction that they had much in common and were truly ʻohana. Thus, Stitch refused to allow 221 (later named Sparky) to be handed over to Hämsterviel as part of a ransom.

When Lilo, Stitch, and Sparky arrived at the location of the ransom exchange, Stitch saved Jumba while Lilo released Sparky to prevent him from being recaptured by Hämsterviel. However, when Sparky saw the Grand Councilwoman prepare to destroy the other remaining experiments along with Hämsterviel, he chose to overload her ship's power grid, saving the experiments and, unintentionally, allowing Hämsterviel to escape with them. When Sparky noticed this, he, along with Lilo and Stitch, stowed away on Gantu's leaving ship.

Later aboard Hämsterviel's mother ship, when Sparky discovered Stitch about to enter a cloning process in which he would be cut in half, the former freed his cousin and the two took revenge on Hämsterviel before Sparky destroyed Hämsterviel's cloning machine.

When Lilo and Stitch later trapped Gantu and 625 aboard Gantu's ship, Sparky disabled the ship's navigation and ejected it from Hämsterviel's mother ship. The three then used the mother ship to return to Earth with Hämsterviel in tow.

Afterward, Lilo and Stitch found Sparky's one true place powering the abandoned Kilauea Lighthouse, where he could make the giant beacon light work again, and as it was big enough, he would not short it out when he touched it.

After the film, Sparky became a supporting character in the series. Lilo and Stitch often visited him along with other experiments for various problems.

Sparky reappeared in "Elastico" as one of the audience members for Lilo's hula dance.

In "The Asteroid", Sparky was one of the six experiments that Stitch convinced to come with him and Lilo to save Earth from an approaching asteroid. Sparky used his electric powers to jump-start the ship and, along the journey, tease Hammerface and shock Pleakley when the latter touched him.

In "Angel", Sparky was one of the experiments that Angel reverted to evil using her song. Later, Sparky and the other depraved experiments attacked Stitch aboard a ship, but Angel turned them back to good before they could finish Stitch off. Working together, the experiments were then able to successfully escape the ship with Stitch.

In "Skip", Sparky was one of the wanted fugitives who had already been captured in an alternate future where Hämsterviel ruled Earth.

Sparky was one of the experiments in "Checkers" that joined Stitch in a rebellion against Gantu. Sparky even used his electrical powers on Reuben when the latter lazed about instead of rowing the boat they were on.

In "Ploot", Lilo tried to convince Sparky to help her defeat Ploot, but he was unable to because an off-screen spectator complained about them tampering with the lighthouse.

In "Remmy", Sparky was one of the experiments in Lilo's dream.

In "Snafu", Sparky was one of the experiments that joined Lilo and Stitch on a mission to rescue Gantu's captive experiments (in actuality, Lilo lured Sparky away from the lighthouse with a trail of batteries, which he ate). Sparky helped break into the ship, and after the rescue team successfully freed the captive experiments, he was seen playing with them in Lilo's obstacle course.

In the film's opening, Sparky can be seen from the lighthouse waving hello to Lilo.

Later, the first 624 experiments, including Sparky, were rounded up by Leroy and taken to a stadium to be destroyed. However, Lilo, Stitch, Jumba, Pleakley, Reuben, and Gantu arrived before the experiments could be destroyed.

Sparky participated in the following battle between the experiments and the Leroy clones by shocking attacking Leroys.

However, the Leroys soon gained the upper hand in the battle but were defeated when Lilo, Stitch, Reuben, and several other experiments performed the song "Aloha ʻOe", which caused the Leroy army to shut down due to the original Leroy's fail-safe.

Sparky has appeared multiple times in the Stitch! anime. He premiered in "An Electrifying Experience" where Sparky is kidnapped by Hämsterviel and put under mind control in an attempt to steal Stitch's Good Deed Counter. Sparky is sent to Izayoi Island where he causes chaos, thus having Stitch and Yuna search the town to investigate. They hear stories of a yellow ghost roaming about and finally catch up to him. Stitch was very excited to see his cousin, but this changed after Sparky shocked Stitch and ran off.

Later on, Jumba notices the head cap on Sparky's head, recognizing it as a mind-controlling device. Suddenly, Gantu and Sparky arrive at Yuna's house, but after a confrontation with Yuna's grandmother, Sparky runs away. In the woods, Sparky takes Stitch's Good Deed Counter, but lightning (courtesy of the Spiritual Stone) causes Sparky's head cap to come apart, freeing him from mind control. Sparky and Stitch let bygones be bygones and reunite. Sparky would later make other cameo appearances and have a recurring role as one of Stitch's closest friends.

In the Season 1 finale "Stitch vs. Hämsterviel", Hämsterviel puts Sparky along with Felix and Angel under his control. He later appeared in the special Stitch and the Planet of Sand. 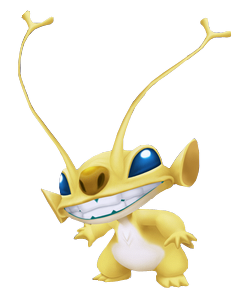 Sparky (known by his original alias, Experiment 221) appears in the prequel game to the Kingdom Hearts series in Deep Space, Stitch's homeworld in this incarnation. During this time, Sparky was still in his pod form under Jumba's watch, while the rest of the experiments were presumably also in pod form. However, Jumba took Sparky's pod with him when he was arrested and brought it onto the Galactic Federation's ship when Experiment 626 (Stitch) was discovered and captured. After feeling insulted by Terra when the latter believes there was good within 626, Jumba decides to demonstrate to Terra the evilness within his experiment by activating Experiment 221's pod, causing Experiment 221 to emerge and attack Terra. When Terra defeats Experiment 221, it reverts to its pod form, though Jumba then tries to console it by saying everything will be all right.

Sparky appears in Disney Emoji Blitz only in a cameo during Angel's power, but he's not playable.

He also have a Evil emoji variation

Sparky can rarely be seen at Disney Parks except for in Disneyland Paris and Tokyo Disneyland where he makes regular appearances being that his franchise is extremely popular in Japan.

Sparky can be seen here located in Disney Village at Disneyland Paris where he and other experiments show up for a meet and greet.

Sparky appeared in the special event at Tokyo Disneyland. He is seen in the parade alongside other experiments including Reuben and Felix.

The Disney Wiki has a collection of images and media related to Sparky (Lilo & Stitch).