Billy: "You said family is forever."
Tommy: "He is family."
―Billy and Tommy Maximoff to Wanda Maximoff[src]

Sparky is a character featured in the Marvel Disney+ series, WandaVision. He is the pet dog of Billy and Tommy Maximoff, and makes his debut in the fifth episode.

Sparky was created by Peter Cameron and Mackenzie Dohr.

Sparky was discovered as a stray, in Westview, by Billy and Tommy Maximoff, who found him alone, and decided to take him in. The boys are precautions of how their mother may react, so they bathe him in the kitchen sink. When she catches the pair, Wanda lifts the dog outside of the water, and talks to them of the responsibilities, in owning a pet. Agnes arrives with dog equipment, and asks if they have decided to name him. Billy suggests Sniffy, but after the pet begins messing with an electric socket, causing sparky to fly, Agnes suggests Sparky, which they settle with, and Wanda conjures a collar for his neck. Billy trains Sparky to do tricks, which he performs in front of Tommy and Wanda. While Wanda talks to the boys, Sparky's attention is brought to the door, and he begins growling out of fear. Wanda opens the door, and Sparky escapes from their sight. He heads next door to Agnes' front yard, and she kills him. She then proceeds to wrap him up in a blanket, and claims he died, after eating leaves from her azalea bushes. 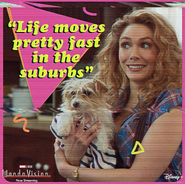