Spider-Man: Freshman Year is an upcoming American Marvel Studios animated streaming television series, created for Disney+. It is a part of the Marvel Cinematic Universe and serves as a prequel to Captain America: Civil War and Spider-Man: Homecoming. The series is the twenty-seventh television series as well as the third animated series in the Marvel Cinematic Universe, and an installment of Phase Four. It will be streamed alongside the likes of Marvel Zombies and X-Men '97. The series is produced by Marvel Studios.

Set before the events of Captain America: Civil War (2016), it explores a freshman-aged Peter Parker's origin story and his early days using the Spider-Man persona.[2]

On November 12, 2021, during Disney+ Day 2021, it was announced that an animated Spider-Man television series that will pay homage to it's comic book roots titled Spider-Man: Freshman Year was in development for Disney+ with Jeff Trammell attached to write and executive produce. A specific release date has not been set yet. 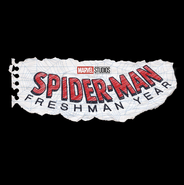