Our favorite neighborhood web-slinger is used to working alone, but now Peter Parker (Benjamin Valic) must discover what it takes to become a truly amazing hero: being a spider friend who works well with others. Together with his friends Miles Morales (Jakari Fraser) and Gwen (AKA Ghost-Spider) (Lily Sanfelippo), they will team up with heroes such as Hulk (Armen Taylor), Black Panther (Tru Valentino), and Ms. Marvel (Sandra Saad), to defeat evil foes and learn that teamwork is the best way to save the day. 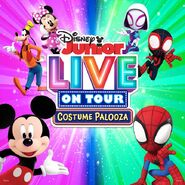 Spidey and His Amazing Friends Trailer-2