Getting insulted and abused

Active
Spike (sometimes referred to as Buzz-Buzz or Barrington) is a bee who often tormented Donald Duck in several cartoons in the late 1940s and early 1950s. He also tormented Pluto in Bubble Bee.

In Bee Inspired, Spike repeatedly frightens Mickey, keeping Minnie from finishing her painting. In the end, they become friends and Spike saves Mickey from an angry swarm of his companions by giving a dramatic speech (all in buzz language with subtitles).

In New Shoes, Spike torments Goofy while stuck in Donald's body and later Donald, after returning to his body alongside the rest of Donald's recurring tormentors (Chip and Dale, Huey, Dewey, and Louie, and Scrooge McDuck).

In Mount Rushmore or Less, Spike (or at least a look-alike) appears in a brief cameo when Humphrey the Bear goes after a large amount of honey in New Quackmore.

Spike the Bee made a handful of appearances in Disney comics. In the 1948 Inferior Decorator he attacks Donald's house with a whole swarm of bees because Donald's new wallpaper represents flowers.

Spike would be used for Epcot's 2018 Flower and Garden Festival as the host for the Spike's Pollen Nation Exploration scavenger hunt game. Twelve figures of Spike were placed around gardens throughout World Showcase to mark the different spots. Spike would return as the mascot for the 2020 festival.

Spike is ready to Sting

Spike is ready to Sting Donald

A Tired Spike near Donald's buttocks

Spike and a Flower

Spike in a Keyhole

Corked at the Last Minute

Spike points at Donald's exposed Behind

Step right up and Sting the Duck 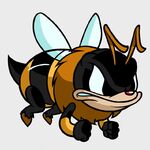 Spike in Legend of the Three Caballeros