House of Mouse
Once Upon a Time
Sofia the First
Tangled: The Series (cameo)

To kill Aurora, but Merryweather changed the curse to a deep sleep

Sends Princess Aurora into the sleep, but she is revived by Prince Phillip

“Before the sun sets on her sixteenth birthday, she shall prick her finger on the spindle of a spinning wheel...and DIE!”
―Maleficent

The Spinning Wheel is an enchanted object which, when the spindle is touched, will send its victim (in this case Aurora) into a deep ageless sleep, originally death, which was cast by Maleficent, but was softened by Merryweather. The victim of this sleep can only be revived by True Love's Kiss.

It is used by Maleficent in an attempt to kill Princess Aurora in Sleeping Beauty and Maleficent.

The spinning wheel plays a major role in the film because it is used by Maleficent to cause her curse on Aurora to be completed. Upset about not being invited to the baby's christening, she casts an evil spell upon Aurora that she would prick her finger on the spindle of a spinning wheel and die before the sun sets on her sixteenth birthday. This briefly caused lots of grief and sorrow on the kingdom, but Merryweather softens the curse so that Aurora would not die, but enter a deep sleep that can be broken by True Love's Kiss. Still fearing for his daughter's life, King Stefan orders that all spinning wheels be burned. Sixteen years later, Maleficent hypnotizes Aurora and transforms herself into the spinning wheel. On Maleficent's command, Aurora pricks her finger and fulfills the evil fairy's prophecy. After which, the spinning wheel disappears. Maleficent then captures Prince Phillip so he can't break her spell, but the Three Good Fairies manage to rescue him. Moments later, he battles and kills Maleficent then kisses Aurora, breaking the spell.

A spinning wheel is an item belonging to Rumplestiltskin, who has had the ability to spin since he was a child and was abandoned by his father. Years later, Rumplestiltskin's son Baelfire was a child during the Ogre Wars. The wheel appeared in his small home where they lived together and again, later, in the main room of his grand estate house where he held Belle captive. He also teaches a young Cora to spin straw into gold to marry Prince Henry. He tells her to think of a moment where she was humiliated and use that to motivate her. When asked what moment he chooses, Rumplestiltskin tells of his humiliation of a King's Duke where he made him kiss his boot. Cora chooses the moment when a young Queen Eva trips her whilst delivering straw to the noble court and being forced to apologize. Cora names the technique "blood-lust" to which Rumplestiltskin approves. Rumplestiltskin is periodically depicted sitting at his wheel and spinning, lost in thought, claiming it helps him to forget.

Maleficent also used a spinning wheel with a weakened version of the sleeping curse with other ingredients to drug herself. She later used it to put Aurora under a sleeping curse.

His wheel is also featured in Storybrooke. One night, Belle finds Mr. Gold spinning his wheel and making potions. David's voluntary submission to a sleeping curse to reach Mary Margaret in the Netherworld is enacted by him pricking his finger on the spinning wheel's spindle, which Gold refers to as "the old-fashioned way", referring to Maleficent's sleeping curse.

Cora is also seen by Mary Margaret and Regina with the spinning wheel in a spirit form within an enclosed room after Mary Margaret, David, Emma Swan, Captain Hook, and her daughter Regina Mills attempt to make communication with her.

With Maleficent having come to care about Aurora, the curse itself provides the spinning wheel. As Maleficent and Diaval race to the castle with Phillip in tow, the curse reforms a crude and deformed spinning wheel, among the destroyed ones King Stefan had locked away in the dungeons. The spinning wheel seems to be calling out to Aurora, leading her through hidden passages in the servants' wings, and causing an itch under her finger, until she finally touched the spindle, drawing blood on it, then she falls into her foretold deep sleep.

The spinning wheel that was used by Maleficent to put Audrey's mother into an eternal sleep, appears as a museum exhibit at the Museum of Cultural History. After all those years, it still works, as Mal used it to send the museum security guard to sleep. Unlike with Aurora's case, the guard woke after hearing an alarm go off in the museum, implying that the spinning wheel is a dud, or only works on Aurora.

The spinning wheel makes an appearance in the episode "The Mystic Isles: The Great Pretender" as its spindle is part of the Wicked Nine. It's heavily suggested that Maleficent's Staff has been transformed into the spinning wheel.

Prince Phillip's mother, Queen Ingrith, has been secretly keeping the spinning wheel inside the castle. She used the spindle to prick King John and frame Maleficent for putting him under a curse. After Maleficent destroys the spinning wheel, the king is awakened and ended the war.

The spinning wheel in Maleficent

The Spinning Wheel in Sofia the First

The spinning wheel in Descendants

Mr. Gold spinning straw into gold in Once Upon a Time

Rumplestiltskin teaching the Miller's daughter how to turn straw into gold

Wheel Master from Kingdom Hearts based on the spinning wheel

The spinning wheel in Rapunzel's room in Tangled

The spinning wheel in Sofia the First

The spinning wheel in Tangled: The Series

The spinning wheel in Ralph Breaks the Internet 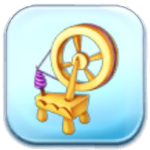