Spirit of a Wizard

Elena of Avalor
"Spirit of a Wizard"

October 25, 2019
"Spirit of a Wizard" is the sixty-third episode of the Disney Channel animated series, Elena of Avalor. It premiered on October 25, 2019 and is the fourteenth episode in the third season.

Elena is trying to find Ash and Esteban with the Scepter of Light, with no luck. Mateo comes in and deduces that they must be using a Cloaking Spell. Elena asks him if he can break it to which Mateo states that he cannot. Mateo says that what they really need is a master wizard like Alacazar. Elena states that they can bring him in as he turned himself into The Lost Princess of Avalor. Elena offers to send a letter to Sofia to ask her to send the book from Enchancia to Avalor. Mateo agrees as that means he will get to meet his abuelo.

Meanwhile, Esteban has finally mastered his Teleportation Power. Zopilote flies in and informs them Takaina has been sealed by magical crystals. Esteban deduces that Elena did that with her Scepter. When Ash bemoans that she'll never obtain Elena's power, Esteban sarcastically suggests that Ash get ahold of Elena's Scepter if she's that thirsty for power. Unfortunately, Ash takes Esteban's remark seriously and gets an idea to steal the Scepter of Light.

Sometime later, Sofia has sent The Lost Princess of Avalor to Avalor Palace. After Mateo opens it, Alacazar appears in front of them. After Mateo introduces himself to his grandfather, Elena informs him of what they need his help with. Alacazar open up his Biblioteca, which is filled with a bunch of magical stuff of Alacazar's. Suddenly, The Lost Princess of Avalor begins to disintegrate and Alacazar begins to vanish. When Elena asks what's going on, Alacazar explains that the spell that turned him into the book wasn't permanent and it's beginning to wear off. When it does, The Lost Princess of Avalor will disintegrate and he will be sent to the Spirit World. Fortunately, there's a potion that can save him. With Alacazar's help, Mateo makes the potion and saves his grandfather just in time. Meanwhile, Esteban has revealed everything to Ash and her master and they set out to attack.

The trio attack Elena's group and steal her Scepter. Alacazar sacrifices himself to save Mateo. Flo and Elena encourage Mateo to believe in himself after he becomes demoralized over losing his grandfather. They discover Ash trying to use her Scepter, only for it to not work. Elena explains the Scepter of Light can't be used by Dark Wizards and takes back her Scepter. Zopilote gets turned into a bird but Ash and Esteban escape. Elsewhere, Ash encourages Esteban that they must build an evil alliance against Elena, to which Esteban agrees. 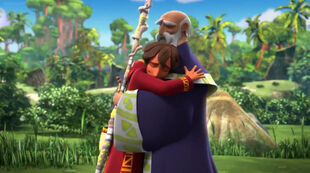 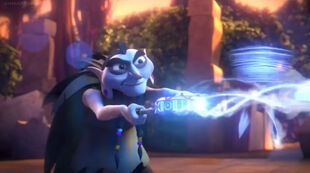 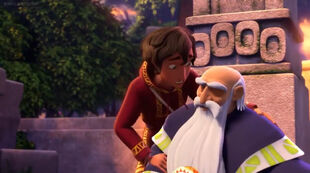 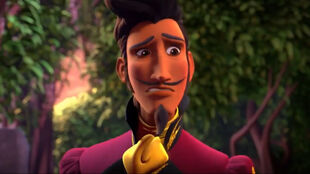 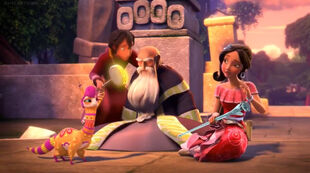 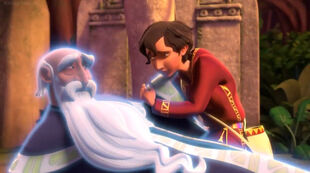 Alacazar starting to fade away. 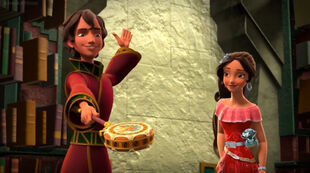