Splashtacular was a loose adaptation of Tokyo Disneyland's 10th Anniversary show "It's Magical!". To better fit Future World, it switched the fantasy themes out for science-fiction ones with an alien sorceress taking the role of Maleficent. Though intended as an exciting new offering to rejuvenate Epcot's attendance, it would be quickly scrapped when management decided it clashed with the modern, cutting-edge image of the newly opened Innoventions.

While the show lasted less then a year, its improvements to the fountain were retained, forming the basis of the fountain shows that exist to this day. Costumes and props like the TerrorsauX were sent to the Magic Kingdom to be used in 1994's "Tomorrowland Galaxy Search" show, with the large robot dinosaur being redressed as an intergalactic Elvis Presley impersonator.

The complete show was also broadcast on the Disney Channel.

Mickey Mouse and his friends invite everyone to the Fountain of Nations at the center of Future World to celebrate all the colors of the rainbow and take an imaginative journey into space. However, the festivities are interrupted by an alien sorceress who comes from a planet that lost all color and life in a war and seeks to steal it. A battle ensues between the forces of good and evil, culminating in the sorceress summoning her ultimate weapon, a fire-breathing cybernetic dinosaur called TerrosauX. Mickey defeats it by summoning the power of the fountain's water and sends the sorceress into a retreat. Mickey and his friends triumphantly celebrate with the water and fireworks shooting into the air and a large rainbow banner being unfurled at the back of Spaceship Earth. 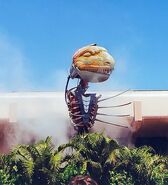