Painting
Splatter Phoenix is a minor villain in Darkwing Duck, and notably the only recurring villain on the series to be killed off (albeit temporarily).

A rejected artist known for her pompous speech (in "Paint Misbehavin'", she proclaims herself a "daringly innovative pseudo anti-neo post-modern deconstructionist"!), her chief weapon is a brush covered with paint that can allow her to enter paintings, animate them, or even to paint wholly new (and usually surreal-looking) creatures that help her.

Splatter Phoenix first appears in the episode "A Brush With Oblivion," in which Darkwing Duck and his sidekicks attempt to stop her from stealing the Mona Lisa's smile. This episode features a number of clever parodies of works by famous artists, such as Grant Wood, Salvador Dalí, and Pablo Picasso.

Her second appearance was in the episode "Paint Misbehavin'," where it was revealed that she, like her creations, is actually painted, possibly by herself. In this episode, she was melted when splashed with turpentine. It is implied by Launchpad that she is actually aware that she herself, along with the entire universe of the TV series, is actually animated/painted by "some higher being."

Splatter Phoenix's popularity with the viewers eventually led to her being brought back in Joe Books' Darkwing Duck comic book. In issue #6's story, an in-universe comic book artist (who resembles the comic's artist, James Silvani) is asked by a fan to draw Splatter Phoenix, which he does use a new supply of ink provided to him by a mysterious benefactor. When he does, though, Splatter Phoenix rises from the drawing, and upon seeing that she's at a comic book convention, begins wreaking havoc. Darkwing and Honker spot her and chase her into several comic books (fittingly, with the art style changing with each one), along the way finding out that she is bound by the logic of the comic worlds they go into. They eventually manage to put her in an ad for Mostess™ Veggie Pies (a parody of Hostess Fruit Pies) and then closing the comic while she's distracted eating the snacks.

In issue #8, the comic book in which Splatter Phoenix is sealed is shown being brought to St. Canard's new maximum-security prison while a curious Negaduck watches, implying that he plans to team up with her. 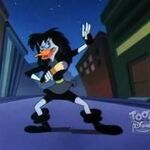 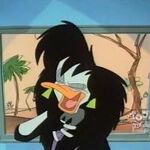 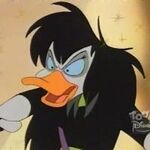 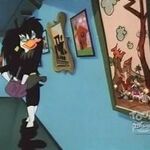