November 6, 2021
"Sprig's Birthday" is the second segment of the forty-sixth episode of Amphibia.

Anne tries to give Sprig a great Earth birthday.

Anne and Sprig are reading up on ways to get back to Amphibia and decide to take a break by playing around. Suddenly, Hop Pop and Polly enter with a mud crown and give it to Sprig. It turns out that it is his birthday and that he is 11 years old now. Anne is surprised to learn this and is then annoyed to learn that all Amphibians do for their birthday is reflect on their life up to that point. Feeling that Sprig needs to do more for his birthday, and also offended at the fact that he never told her it was coming up, Anne promises Sprig that she will make that day his best birthday ever by showing him all the amazing places there is to see in Los Angeles.

The two of them travel throughout the city and take part in riding a rollercoaster, eating at a Mexican restaurant and going to the museum, though they decide to not visit Hollywood. Sprig tells Anne that he enjoyed his birthday today, but when he tells her that it is in his "top 3" birthdays, Anne is angry to learn this and decides to double down on spending time with Sprig. Mr. Boonchuy takes them to a hot air balloon field where they sign up to ride a scary clown balloon that was previously used for a promotional film. The balloon guide tells them that he cannot take them because of strong winds, but allows them to sit in the basket. Nevertheless, Anne and Sprig end up getting blown away by the wind.

Anne and Sprig find themselves having to dodge various obstacles throughout Los Angeles. They eventually get near a spike and they jump off just as the balloon pops and manage to safely land in a garbage bin. Anne angrily blames herself for how the day went, but Sprig tells her that he does not care that she did not know it was his birthday and simply wanted to spend time with her. They make up and Anne gives him a telescope with their names inscribed in it. Sprig reveal that his top two birthdays were the day he was born and the day his parents gave him his hat, which they both agree is iconic. Meanwhile, Mr. Boonchuy is still waiting at the balloon field, unaware of what transpired. 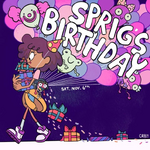