Square Enix Holdings Co., Ltd. is a Japanese video game developer, publisher, and distribution company that is best known for its role-playing video game franchises, which include the Final Fantasy series, the Dragon Quest series, and the Kingdom Hearts action RPG series. Its headquarters are located in the Shinjuku Bunka Quint Building in Shibuya, Tokyo.

The original Square Enix was formed as the result of a mergers and acquisitions|merger between Square and Enix. The merger occurred on April 1, 2003 with Enix as the surviving company. Each share of Square's common stock was stock swap|exchanged for 0.85 shares of Enix's common stock. At the time, 80% of Square Enix staff were made up of former Square Co. employees. As part of the merger, former Square president Yoichi Wada was appointed president of the new corporation, while former Enix president Keiji Honda became its vice president. The founder of Enix, Yasuhiro Fukushima, currently serves as the honorary chairman and largest shareholder of the corporation.

The company also owns Taito Corporation, best known for arcade games such as Space Invaders and Bubble Bobble, and former game publisher Eidos Interactive, which has been absorbed into Square Enix Europe. Square Enix now publishes all of Eidos' IPs and runs Eidos' development studios. Eidos was most well known for publishing the Tomb Raider, Hitman, and Deus Ex series of games. 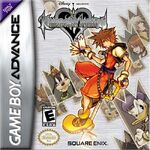 Kingdom Hearts III
Add a photo to this gallery

Marvel's Avengers
Add a photo to this gallery

In addition to being a game developer, Square Enix, much like its competitor Bandai, diversifies its business by producing toys and collectibles.