October 9, 2021
"Squashed" is the sixty-first episode of Big City Greens. It is the second half-hour Halloween special, after "Blood Moon".[1]

It is Halloween time once again and the Greens and Gloria are hoping that this year's events will be better than last's. Meanwhile up on Mars, Gwendolyn Zapp's lab is developing a terrifying growth hormone called Compound 415-C. As she comes to the realization that things are getting out of hand at the lab, she decides to take it down to Earth and develop it down there instead. The Greens get ready to throw their party with Cricket dressed at a jester named "Trickor", though no one seems to get it, and Tilly dressed as Bill. Bill reveals that their pumpkins have not developed properly and are tiny, disappointing him.

Bill and Tilly go to deliver their produce to Big Tech where they run into Gwendolyn. She is actually excited to see that the pumpkins are tiny and shows them her lab and reveals the compound to them. With the compound, their produce can grow big and fresh in a matter of seconds. Bill turns down the offer, but Tilly begins to think on it and takes it secretly. Upon returning home, the party has already started and Tilly sneaks into the garden with the compound. True to Gwendolyn's word, the compound makes the pumpkins grow big and healthy.

Meanwhile, Remy is trying to calm Vasquez down as he cannot tell what is a prank and what is real and Cricket's "tricks" do not seem to have any real effect. Tilly takes Bill to show them their pumpkins and they happily take them inside. However, Benny notices that something is off about them which concerns Tilly. After falling for a prank set up by Cricket and Remy, they are suddenly attacked by a mutated pumpkin, but destroy it easily. Tilly asks for the boys help in trying to stop the party and destroy the pumpkins. When they try to tell everyone to leave, the pumpkins show up and begin capturing and possessing everyone, including Gloria who closed her café early that day.

The pumpkins kidnap Bill while Cricket, Tilly and Remy all hide. They manage to take out one of the pumpkins and free Vasquez who joins the children in their crusade to defeat the monsters. While Tilly goes to rescue Bill from the shed, Cricket, Remy and Vasquez try to free the others from the pumpkins who appear to be creating a tower of some kind. Tilly finds Bill who reveals what she did, only to be interrupted by a large pumpkin monster who escapes from the shed and unleashes small pumpkins that they must fight. Cricket is accidentally tossed out of the house and joins the fight while the pumpkins inside retake everyone and capture Remy and Vasquez.

The pumpkins create a giant radio tower of sorts that sends a message to all the pumpkins all over Big City and brings them all to life. With one final trick up their sleeve, Cricket distracts the big pumpkin and Tilly destroys it with the riding mower, causing all the pumpkins to rapidly die. With the city saved, Bill forgives Tilly and tells her that in order to be a good farmer she has to learn from her mistakes. Gwendolyn arrives after seeing the commotion on Mars, but leaves when she sees that it has been resolved. As she flies back to the planet, vines overtake it and it jump scares with Tilly's face on it shouting "Happy Halloween!" 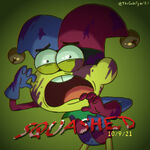