Being warm and comfortable, Dinky and Boomer beaten, eating leaves

Being chased by Dinky and Boomer, water, being cold

Flight (as a butterfly)
Squeaks is a caterpillar in The Fox and the Hound. Throughout the film, Dinky and Boomer were trying to catch him in an attempt to eat him, but by the end he had pupated and transformed into a butterfly and flew away.

Squeaks is a caterpillar who never seems to get a rest from Dinky and Boomer's restless hunt. The birds, who both want to devour the caterpillar, are constantly after him up until the last part of the movie when he transforms into a butterfly. Not only do the two birds not recognize him, but they are now unable to eat him. Squeaks is happy he has nothing to run or hide from anymore. Only Big Mama recognized him in butterfly form as he flew off.

He is characterized by his big eyes and is recognized by that feature when he was both a caterpillar and a butterfly.

Squeaks turned into a butterfly 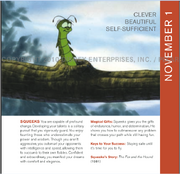