Disney Wiki
Register
Don't have an account?
Sign In
Advertisement
in: Characters, Males, Wonderful World of Color,
and 15 more
English

Swimming in the EAC, playing

Squirt is the son of Crush from the 2003 Disney/Pixar animated film, Finding Nemo and its 2016 sequel.

Squirt is a plucky, playful sea turtle. He idolizes his father, Crush, and has inherited his dad's fearless and easy-going attitude.[1]

A plucky, playful sea turtle like his father, Squirt bubbles with joy, and he loves to frolic in the ocean currents and surf with his father. Squirt's high-spirited personality allows him to make friends easily and enjoy each day as an interesting, new adventure.

Squirt is seen playing hide-and-seek with Dory across the East Australian Current alongside the other sea turtles. He is later then flung off the current much to Marlin's worry that he would be lost in the ocean. Squirt's father Crush tells him to see what Squirt does by going into the current by himself. Squirt then manages to do so, impressing his father as he introduces Marlin to his son. Marlin explains that he did what the turtles liked just as Crush tells Squirt to bid a farewell to Marlin. Squirt and the other small turtles play tag with Dory as the group attempts to play with Marlin to which Marlin tells them about his tragic story about how he lost Nemo to which Squirt and the other turtles then listen to his story.

Later when preparing to leave the current, Squirt then gives Marlin and Dory instructions on how to exit the current they were riding in order to get to Sydney Harbour to which he pushes them in order to leave. At the end of the film, Squirt attends school with Nemo at the end of the film as an exchange student, Mr. Ray takes Squirt along with Nemo and the other students to school.

Alongside Crush, Squirt returned in the sequel Finding Dory, this time as a minor character. In this sequel, while Crush tells Marlin to hang onto him by maintaining his grip in order to arrive in Morro Bay, California safely, Squirt also tells Marlin to hang on tight so that he should hang onto Crush so that he could safely arrive in Morro Bay, California. Dory and Nemo suddenly talk to Squirt and the other young sea turtles when Dory thinks of her parents Jenny and Charlie who would be in Morro Bay, California. Squirt and one of the other turtles ask Dory to know what her parents look like in order to find them, in which Dory (still with her short-term memory loss) thinks that her parents are blue and yellow fish in which Nemo thinks that Dory's parents are actually blue and yellow fish as Dory thinks that she would see her parents if she, Nemo, and Marlin arrive in Morro Bay. As Dory, Nemo, and Marlin arrive at their destination in sunken wreckage, Squirt and Crush wish the three good luck in helping Dory find her missing parents. He and Crush are never seen again throughout the rest of the film after they transport Marlin, Nemo, and Dory to their destination. 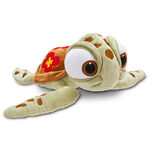 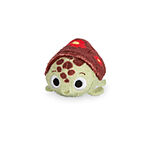 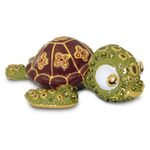 Squirt is accidentally flung out of the current

The baby turtles in Finding Dory

Squirt in Finding Nemo the Musical