To help Marlin and Dory get to Sydney

Swimming in the EAC, playing

The fact that Marlin was separated from his son

Has the ability to re-enter the EAC

Goes to school with Nemo.

"Jellies? Sweet."
"I'm from the EAC, dude!"
Squirt is the son of Crush from the 2003 Disney/Pixar film Finding Nemo. He is voiced by Nicholas Bird.

Squirt is seen playing hide-and-seek with Dory and he then listens to Marlin's story of how he lost Nemo. He then gives Marlin and Dory instructions of how to exit the current they were riding. He attends school with Nemo at the end of the film as an exchange student. Squirt acts and talks just like his dad.

A plucky, playful sea turtle, Squirt idolizes his father, Crush, and has inherited his dad's fearless and easy-going attitude. With his spunky personality and big, expressive eyes, Squirt bubbles with joy, loves to frolic in the ocean currents and surf with his father. Squirt's high-spirited personality allows him to make friends easily and enjoy each day as an interesting, new adventure. 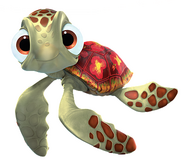 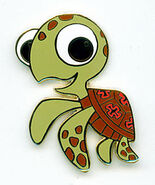 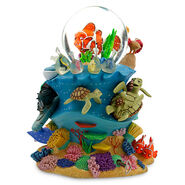 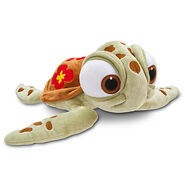 Squirt and Crush in It's a Small World: The Animated Series.

Add a photo to this gallery
Retrieved from "https://disney.fandom.com/wiki/Squirt_(Finding_Nemo)?oldid=1533909"
Community content is available under CC-BY-SA unless otherwise noted.