Disney Wiki
Register
Don't have an account?
Sign In
Advertisement
in: Article of the week, People, Marvel Comics,
and 58 more
English

Stan the Man, The Generalissimo

“Add Disney to Marvel, then you have a company no one can beat.”
―Stan Lee[src]

Lee was influenced by Walt Disney, one book he saved up for when he was a young boy was The Art of Walt Disney. Eventually, Lee needed a job and his Uncle, Martin Goodman the publisher of Timely Comics, hired him on as an office assistant. Initially, his job only entailled minor duties like keeping up supplies for the talent like the ink for the artists. Eventually, Lee got a chance to write professionally, which was an obligatory text story in Captain America Comics #2, "Captain America Thwarts the Traitor's Revenge" (in which Lee created the superhero's signature move of using his shield as a throwing weapon) and did so even during World War II when he was recruited into the US Army as part of the Signal Corps.

A comic book veteran for years as Marvel Comics Editor-in-Chief, Lee was contemplating quitting in 1961, feeling he was wasting his life in the field, following dictates of his publisher such as when he was ordered to fire all the creative staff in the 1950s so the company could rely on unpublished archived content for a while and also endlessly following genre fads. However, his wife, Joan, suggested he indulge in writing a comic book as he would prefer first since he was going to leave anyway. Together with artist Jack Kirby, Lee created The Fantastic Four, combining Kirby's reworked premise from his earlier series for DC Comics, The Challengers of the Unknown, with his own notions for complex character play in superhero stories.

The comic book proved unexpectedly a strong seller and with his artists like Kirby and Steve Ditko, Lee followed up with scores of new titles and characters that would make Marvel a dominant force in the medium. The writing method he used has been called "Plot-first scripting," in which Lee would create a basic plot for the artist to work on. In effect, the artist, especially Marvel's best ones such as Kirby and Ditko, functioned as co-writers creating the specific story actions, settings and characters within the boundaries of the story premise given. Once the pencilling was completed, the artist would present it to Lee who would edit it as well as typically write the dialogue and captions in the story.

As Editor-in-Chief, Lee was also responsible for the concept of the Marvel Universe, a shared universe setting where most of the company's characters would interact with each other across the various titles. Being the official writer of most of the comic books set in this setting, Lee was able to be kept aware of the various activities of the characters and coordinate events to allow them to impact stories in other titles. This enticed readers to purchase them to follow the full scope of the setting. Decades later, the media franchise, the Marvel Cinematic Universe would adapt this narrative concept to great success in its film and television productions.

Later in his writing career, Lee was officially requested by the US Federal government's Department of Health to produce a comic book story about drug abuse. Lee agreed and produced a three-part story mentioning the social problem, only to find that the comic book medium censorship organization, the Comics Code Authority, refused to give their stamp of approval because the story had drug use and considered the story's context irrelevant. Lee, confident that the original government request would give him credibility and with his publisher's support, defied the Code and published without the seal. As it happened, Marvel Comics had enough market strength to ignore any reticence from the market and the story was publicly praised for addressing the social problem, while the Code's resistance was derided as counter-productive. As such, Lee seriously undermined the censorship organization's credibility and it ultimately slid into irrelevance decades later.

Eventually, Lee was promoted to President of Marvel Comics, but found the position's duties dissatisfying and eventually moved Los Angeles to attempt to begin filmed adaptations of the company's content. This proved a frustrating struggle for decades with numerous projects proposed, but rarely carried to fruition while too many completed projects fell short of Lee's hopes. Finally in the late 1990s, Lee's efforts finally achieved the success he dreamed of with successful film properties beginning with the Blade film series. Ultimately, with Iron Man in 2008, the Marvel Cinematic Universe began and rose to become a dominant film franchise that led to Disney acquiring Marvel Comics in 2009.

In Disney movies, he made cameos in The Avengers, Iron Man 3, Thor: The Dark World, Captain America: The Winter Soldier, Guardians of the Galaxy, Big Hero 6, Avengers: Age of Ultron, Ant-Man, Captain America: Civil War, Doctor Strange, Guardians of the Galaxy Vol. 2, Spider-Man: Homecoming, Thor: Ragnarok, Black Panther, Avengers: Infinity War, Ant-Man and the Wasp, Captain Marvel, and Avengers: Endgame, with his cameo in Endgame being his final MCU cameo. His cameo in Big Hero 6 is especially relevant as he voiced Mr. Frederickson.

Lee's cameos in the above films are significant in that he is the credited creator or co-creator of virtually all the major Marvel characters featured in both Disney and non-Disney films, his association with Marvel having dated back to its earliest days in the early 1940s. The major exceptions are the Captain America film series, which Lee had no hand in the creation of the feature characters (Although Lee did create the idea of Captain America using his shield as a thrown weapon in his very first story, "Captain America thwarts the Traitor's Revenge" in Captain America Comics #3) and Lee had nothing at all to do with the creation of Big Hero 6.

He also made a cameo in The Princess Diaries 2: Royal Engagement as the Three Stooges Wedding Guest.

He ven made a non-speaking cameo as a netizen that Vanellope runs past in Oh My Disney in Ralph Breaks the Internet.

In 1995, he had a cameo in Mallrats; this was referenced in Captain Marvel.

Lee was one of the inductees of the Disney Legends Class of 2017.

Lee passed away on November 12, 2018. Upon his death Disney CEO Bob Iger tweeted:

"Stan Lee was as extraordinary as the characters he created. A superhero in his own right to Marvel fans around the world, Stan had the power to inspire, to entertain, and to connect. The scale of his imagination was only exceeded by the size of his heart."

The Marvel Studios logo opening for Captain Marvel featured photos of him instead of their superheroes in honor of Lee's passing in 2018. Spider-Man: Far From Home was dedicated to him and Steve Ditko.

Lee in The Avengers

Lee in Thor: The Dark World

Lee in Guardians of the Galaxy

Lee in Avengers: Age of Ultron

Lee in Guardians of the Galaxy Vol. 2

Lee in Ant-Man and the Wasp

Lee as a hot dog vendor in Mission Marvel

Lee as Stan the Janitor in Ultimate Spider-Man

Fred and his family

Stan Lee behind the scenes of Phineas and Ferb. 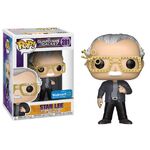 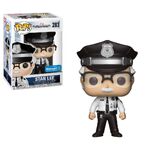 Lee in Ralph Breaks the Internet