Mater and the Ghostlight (as a statue)
Boundin' (cameo)

“Oh, Stanley, I wish you could see this.”
―Lizzie

Stanley was the husband of Lizzie and the founder of Radiator Springs in the Disney/Pixar Cars franchise. In most of the series, he is deceased, and the only thing remaining of him is his statue.

The statue of Stanley marks the very spot where Radiator Springs was founded. As he was traveling west searching for a place to settle and make his fortune, Stanley stumbled upon a natural spring coming up from the earth. He stopped to fill his radiator and he never left. Soon afterward, Stanley met Lizzie, the love of his life, and together they founded Radiator Springs, which soon became a legendary resting spot for travelers making their way across Route 66.[1]

Stanley is painted black with parts that are gray, like many Ford Model Ts. He has blue eyes and white tires, and is based on the Stanley Steamer. He also has a license plate saying "SIOI". Additionally, he has a storage compartment that is used to carry his belongings.

Stanley's statue is located in Radiator Springs, outside the City Hall. When Lightning McQueen ends up in Radiator Springs, a piece of fence tangled around him attaches to the statue, which then comes off its pedestal as McQueen tries to get away from it. The statue is shot up into the air, before landing on the ground, frightening McQueen and causing him to drive away. However, the statue gets carried along, with its base breaking through the main road as McQueen drives through the town, before it then slides off the road and up a ramp, landing on the telephone lines. McQueen tries to accelerate, but the statue causes the telephone lines to get pulled, and preventing McQueen from moving any further. McQueen then gets pulled by the force of the telephone lines, causing him hang from the wires, while Stanley's statue is shot high into the air and lands back on the pedestal.

While the townsfolk take a cruise around the town, Lizzie begins talking to McQueen about how Stanley asked her several times to take a drive with him. She explains to McQueen that after she had declined the first few times, she finally agreed to Stanley. Standing next to his statue, Lizzie admits that she still misses him, wishing that he could see everything that is happening. Thanks to McQueen, Radiator Springs is popular once again after so many years.

Stanley's statue is shown at the beginning, when Red is watering his flowers at the City Hall.

The statue appears at the end, when Mater zooms through Radiator Springs while using rocket jets. The force causes the statue to spin, but it is able to land back on its pedestal.

In Time Travel Mater, Stanley is seen having a drink of water from a natural spring, having the water go into his radiator to cool it down. Just then, he spots Mater, who had been time-traveling, and talks to him about his job of selling radiator caps to anyone who can support them, being any color, shape, make, model, and both gentlemen and ladies. Seeing that Mater does not need a cap, Stanley drives away to travel to California and search for a customer. However, this is not supposed to happen, because if he does not stay, Radiator Springs will not exist. Knowing that this has changed time, Mater goes back to the present to pick up McQueen and head back to the past. Trying to stop Stanley, Mater opens McQueen's hood and throws away his radiator cap, so that he can call out to Stanley. Feeling impressed of having a customer, Stanley comes back, and fits a new cap on McQueen. Moments later, two travelers arrive, having their radiators overheated. Stanley is able to help by taking them to the natural spring, and then give radiator caps to them. Additionally, Mater suggests to him to build a town next to the spring, which gives Stanley the idea of calling it Radiator Springs.

A couple of years later, Stanley sets up a little area called Stanley's Oasis, having all the buildings that can give customers oil, radiator caps, and water to cool down their radiators. He soon meets McQueen and Mater again, being unaware that they had moved forward in time as to see the place quicker, and shows them all of the buildings, being the Bottle Garage, Service Center, and Cap 'n' Tap. Not long after, the three spot someone in the distance who has steam coming out of her radiator. Mater comes to the rescue, realizing that the visitor is Lizzie, and takes her to Stanley, where the two quickly fall in love. Helping out, Stanley offers Lizzie some water to cool down her radiator, and gives her a special radiator cap which she absolutely loves. With Radiator Springs later under construction, Stanley and Lizzie get married at the City Hall, and spend their honeymoon at Comfy Caverns.

In The Radiator Springs 500½, the townsfolk host a celebration of the town being found by Stanley. Everyone is dressed up for the 1900s, along with McQueen being dressed as Stanley, until Sandy Dunes and his pals come to challenge McQueen to a race, along with making insults about how much Stanley had found. Following the race, Sandy believes Stanley to be so tough compared to the different locations that McQueen, Sandy and the other racers experienced in the race. McQueen then adds that Stanley is rough, while a ghost of Stanley, that is invisible to them all, appears and winks.

Stanley appears as a Statue once again, but is only seen one time, that being when Red is watering the flowers around the statue when the scene shows four mouths has past since Lightning McQueen’ big wreck on the track.

Stanley's statue makes many appearances in the Cars games, appearing in Cars: The Video Game, Cars: Mater-National Championship, Cars: Race-O-Rama, and Cars 2: The Video Game. It also makes an appearance in the Fancy Drivin' level of Kinect Rush: A Disney/Pixar Adventure, when the player drives through Radiator Springs. In Disney Infinity, the statue appears outside the City Hall in the Cars Play Set, and at one time, the statue gets swept away during a storm. After the storm ends, the townsfolk manage to find it and take it back. Despite appearing in the play set, the statue is not available in the Toy Box. However, it is available to put in the INterior in the third Disney Infinity game. Additionally, the statue appears as part of the City Hall building in Cars: Fast as Lightning.

Stanley's statue is displayed in Cars Land at Disney California Adventure, being located outside the City Hall.

The statue in Heavy Metal Mater 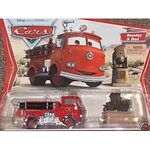 Die-cast packaging of the statue and Red