Lizzy
Stanley Pukowski is a character from Meet the Robinsons. He is one of the students at Joyce Williams Elementary School that participated in the Science Fair.

Stanley first appears in the gym during the science fair where he has brought his Mount Vesuvius scene to the science fair. Showing Mr. Willerstein the project, Stanley attempts to activate the volcano in his project to which the gym coach finds it unacceptable because a project like this is dangerous for school as he tells him twenty laps around the gym as punishment. He is later seen being chased DOR-15 and later notices his project erupting caused by the sparks due to the Bowler Hat Guy's plan to ruin Lewis' future. Afterwards, his further fate is unknown.

When Wilbur first arrives at the Science Fair, he accidentally sets into motion a rivalry between Stanley and Lizzy that escalates into them becoming dueling supervillains. In the altered 2037, Stanley ended up becoming the new InventCo head, with the company becoming Magma Industries, with massive geothermal features dotting the landscape and a demoralized Cornelius working for the company.

Wilbur eventually infiltrates Stanley's headquarters and fights Stanley's most powerful robot Prometheus. But after defeating him, the city starts being affected by the lava underneath and as the city destabilizes, Wilbur retrieves the Time Machine Stanley's robots stole and quickly goes back in time to undo what happened. In the fixed timeline, Stanley runs a pizza franchise much like Art. 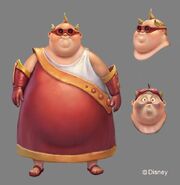 Retrieved from "https://disney.fandom.com/wiki/Stanley_(Meet_the_Robinsons)?oldid=3842544"
Community content is available under CC-BY-SA unless otherwise noted.