Stanley "Caveman" Yelnats IV is the protagonist of the 2003 live-action film, Holes.

"Stanley" is "Yelnats" spelled backwards, and because of this, many members of the Yelnats family have been named Stanley, including Stanley's father and grandfather. Stanley is a good-hearted teenager born to a luckless family who have been cursed for years. He is a very responsible, nice, caring teenager. It is revealed that he cares about Zero. He is the luckiest of the Yelnats descendants.

After being tried and 'proven' guilty of stealing Clyde "Sweetfeet" Livingston's shoes, he was sent to Camp Green Lake, a detention camp in Texas run by Warden Walker. It is revealed that he cares about Zero. Ironically, it was Yelnats' acceptance of Zero that lifted the curse on his family and led to the proof that he was innocent. 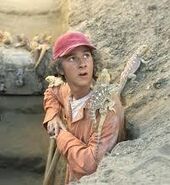 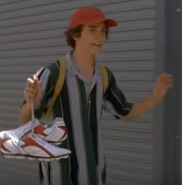 "While Mr. Sir was filling our canteens, I slipped into his truck and, er, stole his sunflower seeds."

"And there's still some in my hole, you could check."

Retrieved from "https://disney.fandom.com/wiki/Stanley_Yelnats_IV?oldid=4105455"
Community content is available under CC-BY-SA unless otherwise noted.