The StarSpeeder 1000 is an interstellar transport vehicle employed by the Star Tours travel agency and the predecessor to the 3000. It is featured in the Star Wars motion simulator attraction Star Tours: The Adventures Continue, and makes a cameo appearance in another Star Wars-themed motion simulator attraction, Millennium Falcon: Smuggler's Run.

It also appeared in the background of Niima Outpost on Jakku, in Star Wars: The Force Awakens.

a StarSpeeder 1000 in The Force Awakens. 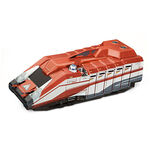 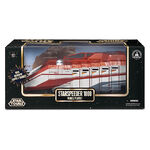 Retrieved from "https://disney.fandom.com/wiki/StarSpeeder_1000?oldid=3739589"
Community content is available under CC-BY-SA unless otherwise noted.