The Star Jetter is a small space craft that appears in the Disney Junior animated series Miles from Tomorrowland. Used by the Callisto Family, the Star Jetter serves as a landing craft during their missions in outer space. It has very powerful engines that can make it go really fast and can carry heavy duty land vehicles and equipment for planetary missions. However, it is much more fragile compared to its mother ship, the Stellosphere, due to its small size. This results in it being prone to crashes and needing long-term repairs when it does.

The Star Jetter's cockpit features four duty stations. Located at the front is the helm station which is operated by Leo Callisto, the starboard computer stations that operate navigation and engineering are operated by Loretta and Miles, and on the port side is the captain's computer station operated by Captain Callisto. 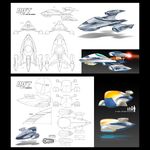 Star Jetter in the hangar bay

Galactech mode Star Jetter
Add a photo to this gallery

Retrieved from "https://disney.fandom.com/wiki/Star_Jetter?oldid=3236404"
Community content is available under CC-BY-SA unless otherwise noted.