Flight simulator with Audio-Animatronics all synced to film

Advertised as "The Ultimate Star Wars Adventure", the attraction was themed as a galactic travel agency and spaceport set within the Star Wars universe that is employed with droids such as R2-D2 and C-3PO and that you are traveling to the Forest Moon of Endor. However, your inexperienced pilot, RX-24, ends up taking a journey through an asteroid field and a battle with the third Death Star.

Although Star Tours may or may not be considered canon, its StarSpeeder 3000 is referenced in canon Star Wars works. In the PC game TIE Fighter, one ship appears on a certain level, and when the player identifies it, the ship is identified as "StarSpeeder 3000," LucasArts' tribute to the attraction. The StarSpeeder 3000 is also mentioned in the Star Wars Expanded Universe novel Specter of the Past and PC game Star Wars Galaxies.

Anthony Daniels reprised his role as C-3PO for this project. RX-24 was voiced by Paul Reubens, a.k.a. Pee-Wee Herman. (Reubens also voiced a similar role—that is, a wacky alien pilot—in the Disney movie Flight of the Navigator in 1986.)

The ride premiered in Disneyland in 1987, in conjunction with the 10th anniversary of the Star Wars franchise. The ride was placed in Tomorrowland replacing Adventure Thru Inner Space and had to be fit in between other attractions. It debuted at the Disney-MGM Studios in 1989 and was given a much more spacious venue, complete with a large AT-AT walker outside the ride entrance. The attraction also premiered overseas at Tokyo Disneyland that same year and at Disneyland Paris in 1992.

The soundtrack was remastered and remixed in 2004 and can be found on the CD A Musical History of Disneyland.

The ride that became Star Tours first saw light as a proposal for an attraction based on the 1979 Disney film The Black Hole. It would have been an interactive ride simulator attraction, where guests would have the ability to choose the ride car's route, but after preliminary planning, the Black Hole attraction was shelved due to its enormous cost - approximately US$50 million - as well as the unpopularity of the film itself.

But instead of completely dismissing the idea of a simulator attraction, the company decided to make use of a partnership between Disney and George Lucas, the creator of the Star Wars franchise, that began in 1986 with the opening of a neighboring attraction, Captain EO in Disneyland. Disneyland then approached Lucas with the idea of Star Tours. With Lucas' approval, Imagineers purchased four military-grade flight simulators for $500,000 each and designed the ride structure.

Meanwhile, Lucas and his team of special effects technicians at Industrial Light & Magic produced the first-person perspective film that would be projected inside the simulators. When both the simulator and film were completed, a programmer then sat inside and manually synchronized the movement of the simulator with the apparent movement on the screen with the aid of a joystick.

On January 9, 1987, at a final cost of $32 million, almost twice the cost of the building and the entire Disneyland park in 1955, the ride opened to throngs of patrons, many of whom dressed up as Star Wars characters for the occasion. In celebration, Disneyland remained opened for a special 60-hour marathon from January 9, 1987, from 10 am to January 11, 1987, at 10 pm.

Taking place sometime shortly after the events of Return of the Jedi, Star Tours put guests in the role of space tourists en route to the forest moon of Endor, the site of an infamous battle where Rebels fought against the Empire via the Star Tours travel agency.

Much was made of this throughout the queue looking like a spaceship boarding terminal with posters advertising voyages to different planets, and a giant screen informed riders of various travel packages. This area was stocked with Audio-Animatronic characters that seemed to speak to the ride patrons (including C-3PO and R2-D2), as well as a life-size mock-up of a StarSpeeder 3000, the spacecraft which riders were about to board.

Guests then entered a maintenance area where an underproductive G2 droid performed repairs on another droid while being distracted by the observing guests, and another droid inadvertently pointed out all the supposed flaws of the StarSpeeder 3000 and its RX pilots. A ride attendant escorted guests to one of several loading stations where they waited for their turn to ride.

A television screen posted a countdown to take-off time and showed images of the Starspeeder 3000 spacecraft being serviced. As launch time approached, a safety video was shown featuring Star Wars aliens, Disney Imagineers, and their families. It instructed guests on how to fasten their seat belts and where to place belongings.

Once the doors to the Starspeeder opened, guests walked across bridges into one of several StarSpeeders, while C-3PO welcomed the riders and repeated the safety spiel. As the doors closed, the bumbling pilot droid of the ship, RX-24 or Rex (voiced by Paul Reubens), chatted up the guests about the trip as R2-D2 was loaded onto the spacecraft.

Once in space, Rex asked R2-D2 to make the jump to lightspeed as well, but accidentally overshot the ship's hyperdrive, and passed the Endor moon, and instead got caught inside a comet cluster. The ship got hit by several comets before getting trapped in one of the larger comets. The Starspeeder weaved its way through the comet and escaped by crashing through one of the thinner walls. Upon escaping the comet, however, the ship encountered a Star Destroyer.

Rex used the StarSpeeder's lasers to eliminate several TIE fighters while a rebel pilot destroyed the Death Star in the same manner Luke Skywalker did, by firing two proton torpedoes into the exhaust port. The X-Wings jumped to lightspeed to avoid the Death Star's explosion, and a final lightspeed jump sent the StarSpeeder back to the spaceport, but not before a near collision with a fuel truck in the hangar. C-3PO then instructed the passengers on the existing procedure before thanking and bidding them farewell.

(In order of appearance)

At the inaugural D23 Expo in Anaheim, California, on September 12, 2009, Jay Rasulo and Darth Vader (voiced by Fred Tatasciore)[1][2] announced that Disneyland's Star Tours attraction would be closing in October 2010 to make way for an updated version, which will open in 2011. Tatooine was announced as one of the new destinations in Star Tours II, with footage released of the StarSpeeder 1000 speeding through a podrace.

The original Star Tours attraction at Disneyland saw its final day of operation on July 26, 2010, and Star Tours: The Adventure Continues is now open in its place. The Disney's Hollywood Studios version of the attraction closed on September 8, 2010, now updated to Star Tours II.

Star Tours: The Adventures Continue officially opened at Disney's Hollywood Studios on May 20, 2011, and at Disneyland two weeks later, on June 3. 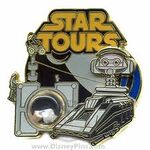 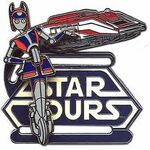 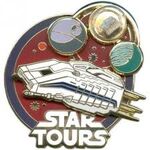 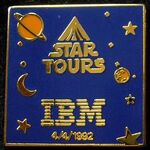 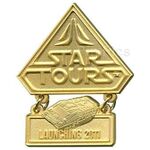 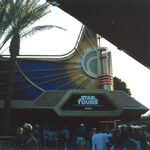