“The choices we make, the actions we take, moments both big and small shape us into forces of destiny.”
―Maz Kanata

Star Wars: Forces of Destiny is an animated miniseries. The series features Rey, Ahsoka Tano, Jyn Erso, Leia Organa, Sabine Wren, and other iconic characters from the Star Wars universe. The series premiered on July 3, 2017 on the Disney YouTube Channel, and made its television debut on July 9 on the Disney Channel.

Focusing on female characters across multiple eras and installments of the franchise, the series explores how each character's decisions affect her destiny.

Forces of Destiny aims to expand the galactic saga’s audience by highlighting its female heroes in eight new 2D animated shorts, which will debut on Disney YouTube in July, then be packaged with eight others in the fall for a pair of TV specials airing on the Disney Channel. The central figures are Princess Leia from the original trilogy era, Padmé Amidala from the prequels, Rey from The Force Awakens, Rogue One's Jyn Erso, and a trio from the animated Star Wars Rebels series: Sabine Wren, Ahsoka Tano, and Hera Syndulla. Multiple heroines are set to appear in adventures with each other, even though some of them have been separated by different timelines – but it is all official canon. "One of the opportunities here was to tell the stories in between the larger moments and imagine some of the ways our characters have crossed," says Carrie Beck, executive producer of the shorts and a member of the Lucasfilm story group braintrust. "It’s all part of the larger swath of storytelling."

Each of the Forces of Destiny shorts are about three minutes long, and they were penned by Jennifer Muro, a writer known for DC’s Justice League Action, and directed by Brad Rau, who has helmed episodes of Star Wars Rebels. Dave Filoni, executive producer of Rebels, also helped create the new storylines. Other sci-fi/fantasy franchises have created special stories to attract female fans, like DC Superhero Girls, which rounded up heroes and villains into a high school. Rather than putting its heroines into a new environment, like a galactic classroom or summer camp, Lucasfilm preferred to keep the characters within the same universe.

Many of the original actresses will be voicing their characters, except for Carrie Fisher (due to her passing) and Natalie Portman. Leia will be voiced by Shelby Young in the shorts, while Catherine Taber, who voiced Padmé in The Clone Wars, reprises her role. Lupita Nyong'o will narrate the shorts as Maz Kanata.

The Forces of Destiny shorts will be accompanied by a new line of Hasbro "Adventure Figure" toys that aim to blend the qualities of traditional dolls (11-inch height, rooted hair, changeable outfits) with old-school action figures (weapon accessories, battle attacks). "They all have an action motion that’s true to their character, so, for instance, Rey can swing her lightsaber," Hasbro’s Samantha Lomow tells EW, squeezing the character’s legs to make her torso swivel as her blue laser sword cuts the air.

The primary goal of Forces of Destiny was to reach novice fans – especially young girls who have not previously felt welcome in the fandom. But they are meant to also appeal broadly. "That’s really the challenge: How do we make this relevant for somebody who is new to Star Wars – and someone who has experienced all of Star Wars," Beck says. "We have these new access points for kids, but (the shorts) are not so reliant on knowing everything else that’s happened in Star Wars history." 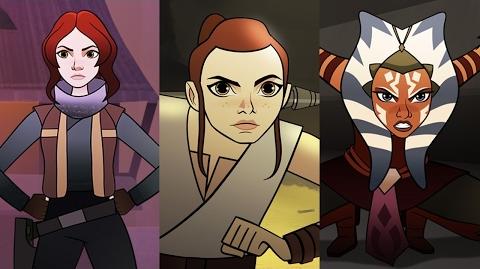 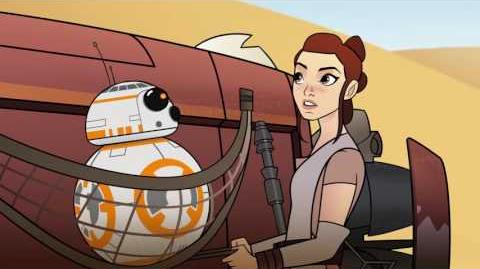 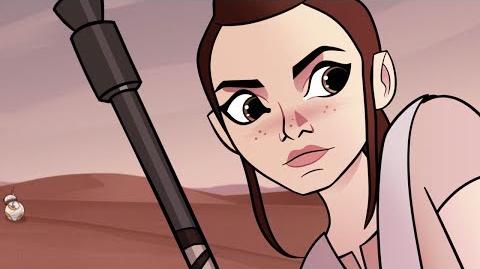 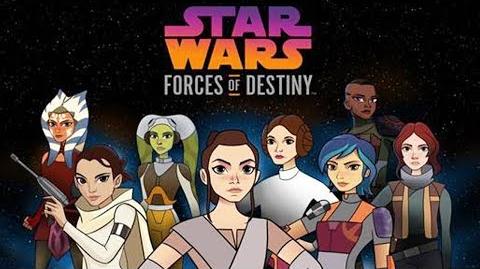 The Disney Wiki has a collection of images and media related to Star Wars: Forces of Destiny.