Star Wars: Galaxy's Edge is a themed land at Disney's Hollywood Studios. It is the second Star Wars-themed land, following its Disneyland equivalent.

Galaxy's Edge is replacing the majority of the park's Streets of America, including the Lights, Motors, Action! Extreme Stunt Show and Honey, I Shrunk the Kids: Movie Set Adventure which closed on April 2, 2016, as well as the surrounding backlot facades, restaurants, and shops. Together with the previously closed The Legend of Captain Jack Sparrow attraction, Galaxy's Edge is part of a major expansion of the park that includes Toy Story Land.[2][3][4][5] The remaining operating portions of Streets of America (containing Muppet*Vision 3D) were left undisturbed and renamed as Muppets Courtyard (later Grand Avenue).[6] The land will be accompanied by Star Wars: Galactic Starcruiser. Both the land and the hotel will be connected by a specially-themed transport system that will take guests between the two. 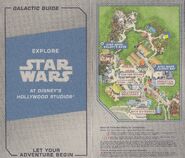