Start a Wiki
watch 02:01
'The Last Jedi' trailer Is Here!
Do you like this video?

Unofficial reports claimed in November 2012 that Lawrence Kasdan, who originally wrote the screenplays for both The Empire Strikes Back and Return of the Jedi, and co-writer Simon Kinberg would divide writing responsibilities for The Last Jedi and The Rise of Skywalker, and both would co-produce all three films of the upcoming sequel trilogy, alongside Kathleen Kennedy.

In February 2013, Disney revealed that Kasdan and Kinberg were working on standalone films as well.

During a concert with the Young Musician's Foundation Debut Orchestra on February 9, composer John Williams stated that he was hoping to get the chance to write the musical scores for the entire new trilogy. His involvement was made official when Star Wars Insider 144 stated he would score the "new Star Wars trilogy".

In June 2014, it was announced that Rian Johnson, director of the hit 2012 sci-fi flick Looper, would write and direct The Last Jedi.

It was announced in August 2014 that actress Daisy Ridley would reprise her role in both Episodes VIII and IX.[2]

In fall 2015, Benicio del Toro was cast as a new villain in the film, joining Adam Driver and Andy Serkis, who play the trilogy's main villains Ben Solo/Kylo Ren and Supreme Leader Snoke respectively. Gugu Mbatha-Raw was additionally cast as a fourth main lead, signed on for both Episodes VIII and IX. She joins Daisy Ridley, John Boyega, and Oscar Isaac who play Rey, Finn, and Poe Dameron respectively.

In January 2017, the title of Episode VIII was officially revealed to be The Last Jedi.[1]

Right after the destruction of the Starkiller Base, General Leia Organa leads the evacuation of the Resistance forces from planet D'Qar from the First Order fleet which has arrived there. Against her orders, Poe Dameron leads a costly counterattack that destroys a First Order dreadnought. The remaining Resistance escapes into hyper-space, but the First Order uses a device to track them, and attacks again while Kylo Ren hesitates to fire on the lead Resistance ship after sensing his mother Leia's presence on board, but his wingmen destroy the bridge, killing most of the Resistance's leaders. Leia is dragged into the space, but she survives using the Force.

As Leia is recovering, Vice Admiral Amilyn Holdo assumes command of the Resistance. Running low on fuel, the remaining fleet is pursued by the First Order. Rey, which has arrived in planet Ahch-To with Chewbacca and R2-D2 with the Millenium Falcon and attempts recruiting legendary Luke Skywalker to the Resistance. Under self-imposed exile, Luke refuses to help and says that the Jedi must end. However, he is encouraged by R2-D2's recorded old message of Leia as a princess, and begins to train Rey in the ways of the Force. Rey and Kylo begin communicating through the Force, puzzling them both. After Kylo tells Rey what happened between him and Luke that caused him to choose the dark side, Luke confesses that he momentarily contemplated killing Kylo upon sensing that Supreme Leader Snoke was corrupting him, this has driven Kylo destroying Luke's new Jedi.

Convinced that Kylo can be redeemed, Rey leaves Ahch-To. Luke prepares to burn the Jedi library, but hesitates. Yoda's ghost appears before Luke and destroys the library by summoning a bolt of Force lightning, encouraging Luke to learn from his failures before leaving. Meanwhile, Poe reunites with Finn who has awakened from his coma.

Finn attempts to escape, but he is tased by mechanic Rose Tico until they both meet with Poe, who entrusts them and BB-8 with a secret mission to deactivate the First Order's tracking device. Maz Kanata makes contact with them and directs them to the casino town of planet Canto Bight, where they meet the hacker DJ. Pursued by the First Order, they escape the city with the help of stablehand children and racing animals they set free. Finn, Rose, and DJ infiltrate Snoke’s flagship, but are captured by Captain Phasma whilst Ren brings Rey to Snoke , who reveals that he created the connection between her and Kylo as part of a plan to defeat Luke.

Holdo plans to evacuate the remaining members of the Resistance using small transport vessels. Believing her plan is cowardly and futile, Poe leads a mutiny while the recovered Leia stuns him via a blaster, thus allowing the evacuation to proceed. Holdo remains aboard the ship as a decoy to mislead Snoke's fleet as the others flee to an abandoned base on planet Crait.DJ buys his freedom by revealing the Resistance's plan to General Hux which arrives to see who Phasma captured, and the First Order fleet begins firing on the evacuation transports, destroying many.

Ordered to kill Rey, Kylo instead kills Snoke and defeats his Praetorian Guard alongside Rey. Rey hopes that Kylo has abandoned the dark side, but he instead asks her to rule the galaxy with him. Refusing, she and Kylo battle for control of Luke's lightsaber, destroying the weapon. Holdo sacrifices herself by slicing through Snoke's flagship at lightspeed, crippling the First Order fleet. Rey escapes the destruction while Kylo declares himself Supreme Leader. BB-8 frees Finn and Rose; they defeat Phasma's troopers while Finn causes her death.

They join the survivors in Crait but when the First Order arrives, Poe, Finn, and Rose attack with old speeders. Rey and Chewbacca draw TIE Fighters away in the Falcon, while Rose stops Finn from sacrificing himself and kisses him. The First Order penetrates the Resistance fortress using a siege cannon. Luke appears and confronts the First Order to allow the surviving Resistance to escape. Kylo orders the First Order's forces to fire on Luke, but they fail to harm him. He then engages Luke in a lightsaber duel; upon striking Luke, Kylo realizes that he has been fighting a Force projection. Rey helps the remaining Resistance escape on the Falcon. An exhausted Luke dies peacefully on Ahch-To, becoming one with the Force. Rey and Leia sense his death, and Leia tells Rey that the Resistance can rise again.

At Canto Bight, the stablehands recount the story of Luke Skywalker; afterward, one of them moves a broom with the Force and gazes into space.

The review aggregator website Rotten Tomatoes reported that 91% of critics have given the film a positive review based on 457 reviews, with an average rating of 8.09/10. The website's critics consensus reads, "Star Wars: The Last Jedi honors the saga's rich legacy while adding some surprising twists — and delivering all the emotion-rich action fans could hope for." At Metacritic, the film has a weighted average score of 85 out of 100 based on 56 critics, indicating "universal acclaim".

Trailers and Behind the Scenes 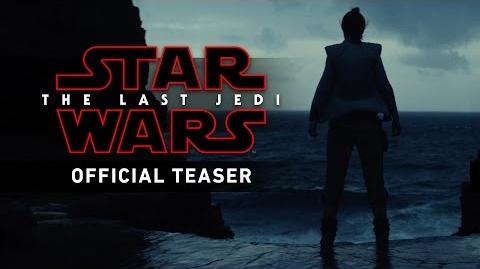 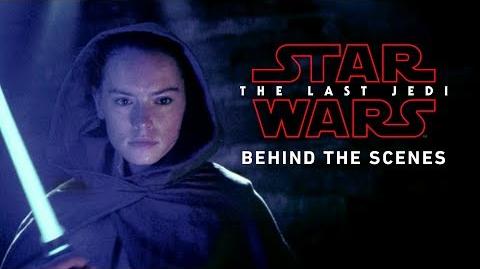 Star Wars The Last Jedi Behind The Scenes 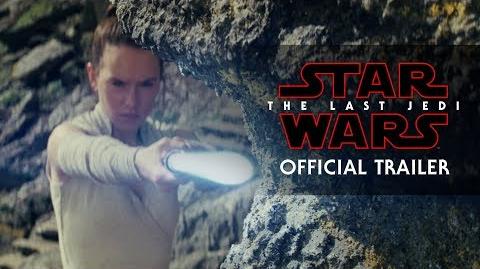 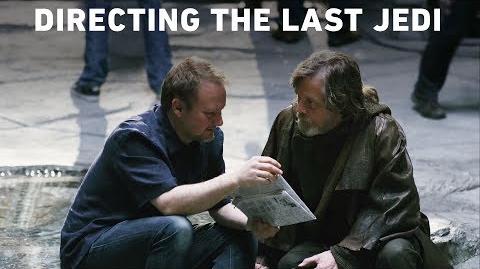 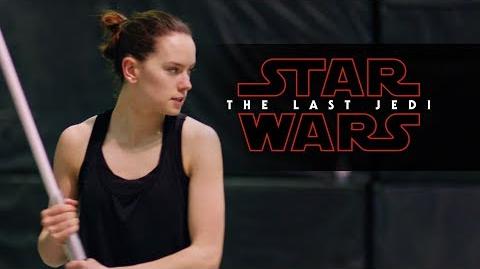 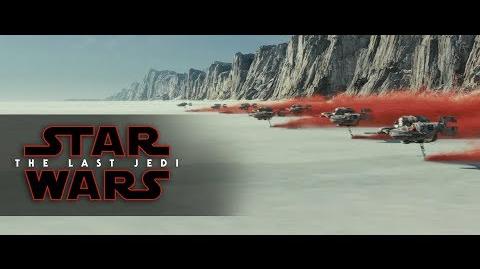 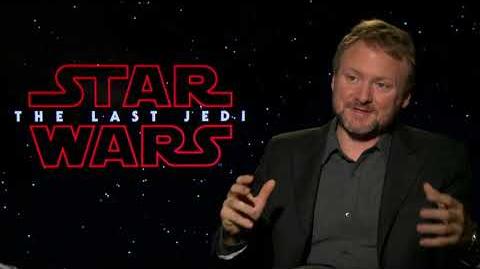 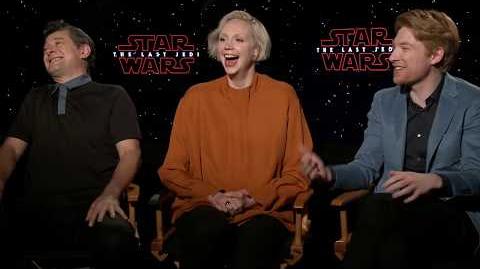 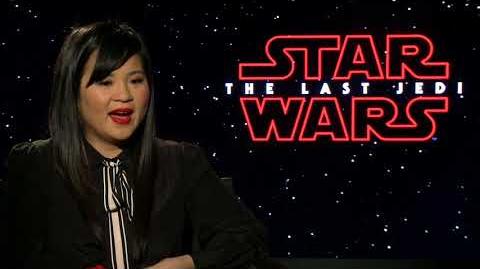 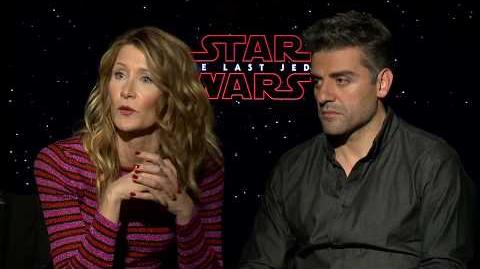 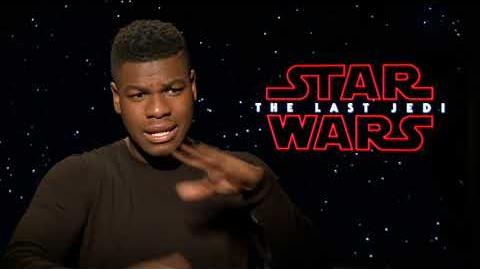 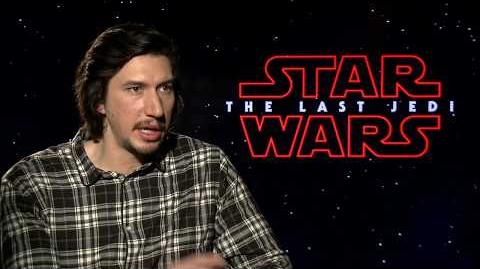 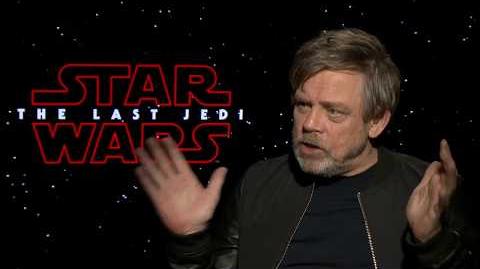 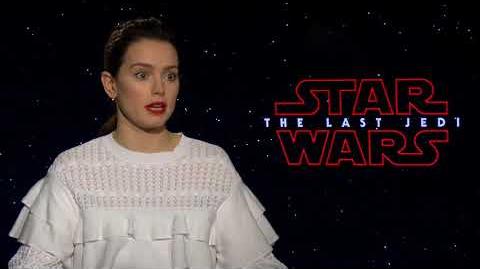 The Disney Wiki has a collection of images and media related to Star Wars: The Last Jedi.

Start a Discussion Discussions about Star Wars: The Last Jedi