Following the events of Star Wars: Return of the Jedi, Darth Vader is no more, the Emperor is dead, and the galaxy is forever changed. That's where you come in.

Kabam, in collaboration with The Walt Disney Company and Lucasfilm, have announced the development of Star Wars: Uprising, the first mobile game to take place in the time period between Return of the Jedi and Star Wars: The Force Awakens.

Star Wars: Uprising feature's key events set in the Anoat Sector, inclusive of Hoth and Cloud City, and will allow players to create characters, go on missions, build their gear and skills, and organize crews and factions to participate in wide-ranging battles. Keeping up with tradition of Star Wars role-playing games, players will learn hundreds of new abilities and collect classic gear and equipment conducive to creating their own takes on iconic roles: Smuggler, Bounty Hunter, Rebel Guerrilla, Diplomat, Gambler, or something new entirely.[1] 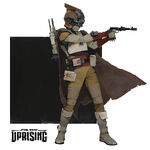 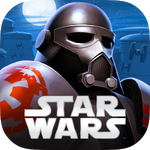