Star Wars: Visions (Japanese: スター・ウォーズ：ビジョンズ) is an ONA (Original Network Anime) by Lucasfilm that aired on Disney+ on September 22, 2021. It is a series of anime original short films with a new and distinct cultural perspective to Star Wars, created by various leading Japanese anime studios. The initial release of this anthology series was announced to have ten episodes, but this was changed to nine, as the fifth episode, "The Ninth Jedi", was originally envisioned as two episodes.[1][2]

A second season is expected to be released in Fall 2022, that will consist of new shorts as well as continuations of some of the previous ones.[3]

Presenting all-new, creative takes on the galaxy far, far away, Star Wars: Visions will be a series of animated short films celebrating Star Wars through the lens of the world’s best anime creators. The anthology collection will bring [9] fantastic visions from several of the leading Japanese anime studios, offering a fresh and diverse cultural perspective to Star Wars.[4] 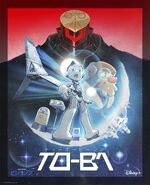