Star Wars Hyperspace Mountain: Rebel Mission is an indoor/outdoor steel roller coaster attraction in Discoveryland at Disneyland Paris themed around a journey into outer space. Originally themed around Jules Verne's classic 1865 novel From the Earth to the Moon, the attraction opened on June 1, 1995, three years after the opening of the park, as an intended revival of interest to draw more guests to the financially unstable European resort. Unlike other Space Mountains found around the world, this version had a steampunk-detailed appearance, with a huge dominating Columbiad Cannon and a plate-and-rivet exterior, in keeping with Discoveryland's retro-futuristic theme and futuristic theme. It was the only Space Mountain to feature inversions and a section of the ride outside the mountain, that being the station and cannon. The attraction was also the first roller coaster to feature a Synchronized On-Board Audio Track (the first roller coaster to feature non-On-Board audio was Chaos at Opryland USA Themepark). The audio track was written by Steven Bramson and was in keeping with the Victorian theme.

The original version of the ride, Space Mountain: De la Terre à la Lune, closed in January 2005 and the theme was changed to Mission 2, planned as a continuation rather than replacement of Verne's classic, where the rider was taken further into space on a new adventure. The track remained unaltered. The new onboard audio track was composed by Michael Giacchino, and the refurbished attraction debuted on April 9, 2005. It was later refurbished over a six-month period from January to July 2015, with improvements made to the special effects and overall presentation.

In January 8, 2017[1], Space Mountain: Mission 2 closed to become Star Wars Hyperspace Mountain: Rebel Mission, as part of its 25th anniversary celebration. Originally planned to be just an overlay turned out to be a permanent installation, just like Hong Kong's Space Mountain.

Originally, Disneyland Paris wanted to make the Parisian and European Version of a replica of Space Mountain from Tokyo Disneyland. However, after the Parisian site had been chosen and work began on Discoveryland, a showcase attraction was planned. Discovery Mountain was initially designed to feature not only Space Mountain, but a variety of other attractions, exhibits, and restaurants. The building was going to be 100 metres in diameter, rather than 61 metres, the diameter of the Space Mountain dome.

Inside, the following items were to feature:

Discovery Mountain's budget became so huge that cuts were inevitable. In addition, the resort had encountered a loss of millions of French francs in its first three years of operations. This was due to low hotel occupancy, low guest spending and lower attendance than projected, partly due to the colder winter weather—in sharp contrast to Tokyo Disneyland, which sees crowds year-round regardless of the weather. The Victorian-inspired design of Space Mountain (initially named Discovery Mountain before its name change), with its huge Columbiad cannon, and containing only the indoor roller coaster, was decided upon as the best choice for the financially unstable resort, as well as a nearby walkthrough recreation of the Nautilus, entitled Les Mystères du Nautilus.

However, in 2001, Tokyo DisneySea opened, featuring Mysterious Island, a recreation of Vulcania Island from the movie 20,000 Leagues Under the Sea. This island features some elements from Discovery Mountain (for example the ride Journey to the Center of the Earth or the Nautilus ride). Michael Eisner, ex-CEO of The Walt Disney Company, credited Space Mountain: De la Terre à la Lune and its creator, Imagineer Tim Delaney, as the savior of Disneyland Paris.[2]

An extravagant version of Space Mountain had been planned since the inception of the Euro Disney Resort, but was reserved for a revival of public interest. Located in Discoveryland, the park's alternative for Tomorrowland, this Space Mountain was originally designed as a view on space travel from a Jules Verne-era perspective, based on the 1865 Jules Verne novel From the Earth to the Moon.

Paris' version of Space Mountain was the fastest of the five versions of the ride, the only one to include inversions, and also the only one to feature a portion of track outside the mountain itself (that being the station and the launch Cannon). The $89.7 million attraction featured a 1.5G uphill catapult launch at 40 mph (64 km/h), and three inversions (sidewinder, corkscrew, and cutback). It was the first roller coaster to feature on-board music, known as a SOBAT (Synchronized On-Board Audio Track). SOBATs would later be added to Space Mountain at Disneyland, and Space Mountain at Hong Kong Disneyland.

Space Mountain's first SOBAT was composed by Steven Bramson, primarily based on film scores by John Williams and the 20,000 Leagues Under the Sea score. Moreover, in order to create a proper Victorian atmosphere in the queueline and around the building, a musical loop was created by selecting several themes from movies such as Krull, The Rocketeer, Always or Christopher Columbus: The Discovery. From 1995 to 2005, the ride was known as Space Mountain: De la Terre à la Lune.

Guests entered the dome and were ushered into the inside queueline known as the Stellar Way, an open walkway where guests could have a look at the coaster itself and see trains during their journey in space. Then they reached the Victorian chambers of the Baltimore Gun Club (the Club which built the Cannon), and discovered the plans and drawings of the Columbiad and the journey to the Moon. They then boarded golden Moon trains in the Victorian station.

The trains took them through a tunnel into the Columbiad Cannon. As the blast-off occurred, trains were suddenly propelled out of the Columbiad to the top of the dome. The space travel started with riders crossing asteroid fields until they got swallowed by Colonel Impey Barbicane's Bluemoon Mining Machine, an industrial space machine built by the President of the Gun Club to extract mineral resources from asteroids. Escaping the danger of this device, trains headed to a huge asteroid which they entered its molten lava core. Afterwards the train came to the climax of the ride, the Moon itself (with a smiling face, as seen in Georges Méliès' 1902 movie adaptation of the novel). On the left, one an see a road sign placed on an asteroid saying in french "To the Moon 50,000km" And on the right, one could notice that Jules Verne himself, wearing a retro-futuristic spacesuit, had landed on a nearby asteroid. Then trains headed back to Earth, crossing other asteroid fields and bumping into another asteroid. When riders reached the atmosphere, bolts and light rays were visible around the train as it heated up. Trains finally landed on Earth, into the Electro-de-Velocitor, a machine that stopped them suddenly so that their speed would be reduced when they headed back to the station.

In September 2004, Le Visionarium was closed, leading to significant changes in Discoveryland. Space Mountain: De la Terre à la Lune was to be entirely refurbished, due to financial plans from Disney executives, which also included the construction of Buzz Lightyear Laser Blast and the development of Walt Disney Studios Park with Toon Studios and the Tower of Terror.

In 2005, Space Mountain underwent modifications and was officially renamed Space Mountain: Mission 2, having already gotten a complete exterior repaint in 2004. This journey took riders "beyond the Moon, to the very edge of our universe." Therefore, some aspects of the ride changed, such as the effects on the track: the video shown in the second lift of the ride (the smiling moon seen in the original was replaced with a supernova) and the introduction of a simulated vortex using bent neon lights.

Although the track remained unaltered, trains were fired from the bottom of the cannon, whereas originally they were fired at the top which is about halfway up the actual incline. The Victorian setting was changed as well, and received modern futuristic elements. Trains received a simple repaint from gold to silver. A new futuristic soundtrack was written by Michael Giacchino (who was also responsible for the SOBATs in the versions at Disneyland and Hong Kong Disneyland) and the Victorian loop in the queue line was replaced with radio messages.

Guests entered the dome on its side and were ushered into a futuristic, dimly lit corridor featuring photos of several cosmic phenomenons (which replaced the former Stellar Way). They proceeded into the Victorian lounges of the Baltimore Gun Club, completed with plans and drawings of the Columbiad Cannon and the journey to a supernova. They then boarded silver trains in the station.

Trains were taken through the tunnel leading them inside the cannon. A countdown was audible, and the blast propelled trains beyond the moon. Space travelers encountered many, many cosmic objects which looked like space bodies, such as a comet, planets, and several asteroid fields. When they reached a supernova, they saw it explode and destroy its nearby surroundings. Trains were then shot forward back to Earth by passing by melting asteroid fields. In order to reach Earth, they finally entered a "hypergate", a red vortex-like wormhole which represented a shortcut through the universe. As in the previous version, the Electro-de-Velocitor slowed trains down before they reached the station. The ride was refurbished from January–July 2015, with the addition of a single rider queue line and the overall presentation enhanced.

Shoot for the Moon

Space Mountain was the basis for the 1995 BBC2 documentary Shoot for the Moon, which looked at the creative process and the history of engineers, technicians, and musicians of The Walt Disney Company, featuring project manager Tim Delaney, music producer Aarin Richard and Disney Legend Ward Kimball. The 45-minute documentary was directed by Philip Martin, and was first broadcast on 30 August 1995 at 6:45pm.

After entering the dome, guests are ushered into a long black corridor with pictures of X-wings and Tie-fighters. A video can be seen of a woman telling space travelers all about the mission and the safety restrictions before embarking on their journey. They then proceed into the hall of the Baltimore Gun Club, where blueprints of the mission's propulsion device are shown. The device depicted is the Columbiad, a large cannon designed to launch spacecraft into hyperspace at lightning speed. Guests then enter the loading station, where they board blue, Victorian-style rocket trains designed by Vekoma, and prepare to be catapulted deep into space. The trains move into a tunnel as the iconic Star Wars theme music plays before entering the cannon. After a brief lecture from Admiral Ackbar, a command to launch is given and the Columbiad fires, propelling the trains forward, accelerating to 44 mph (71 km/h) and launching into Hyperspace from Earth.

Upon arrival at Jakku, a group of TIES quickly ambushes the train, as it bobs and weaves its way through the dogfight as laser fire is volleyed between spaceships. With the TIES destroyed, the Blue Squadron fires at a nearby Star Destroyer, striking a critical blow to its bridge. Another jump into hyperspace is made sending the trains back to Earth. 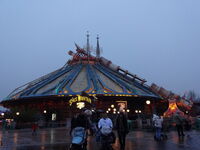 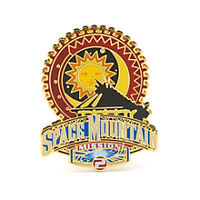 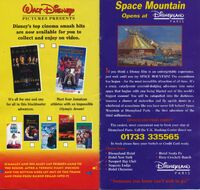 The original launch from outside. Notice the rust on the mountain's side.

Promotional poster for the ride

Retrieved from "https://disney.fandom.com/wiki/Star_Wars_Hyperspace_Mountain:_Rebel_Mission?oldid=4280570"
Community content is available under CC-BY-SA unless otherwise noted.