Rebels wanted! Are you ready to stand up against the Empire? Become an intergalactic hero in Star Wars Rebels: Recon Missions, the new action-platformer mobile game! Take on 4 FREE levels of battle against the Empire as Ezra Bridger, dodge TIE fighters, blast stormtroopers, and drive an Imperial AT-MP.

With in-app purchases, wield a Lightsaber, fight Star Wars bosses, drive an AT-DP, and unlock 30 more levels and 50+ unique challenges. Customize and expand a secret Rebel Haven where heroes can hide out and rescue citizens. And, interact with characters like Zeb the muscle of the Ghost team, Hera the pilot, and even Chopper the grumpy Droid. 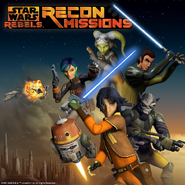