Starkiller
Another Death Star
The Most Powerful Weapon Ever Built

Starkiller Base is a superweapon built into the planet Ilum by the First Order. Like the Death Star I and II, Starkiller Base was capable of destroying entire planets. However, it was superior to the previous models. It relied on energy harvested from the sun, was several times larger than the Death Stars, and could destroy more than one planet at a time, its first target being the Hosnian system, the seat of the New Republic's Senate.

Starkiller Base was destroyed thanks to the efforts of Han Solo, Finn, Rey, and the Resistance X-Wing Fleet, but at the cost of Han's life and half of the fleet's lives.

Starkiller Base preparing to fire.

Starkiller Base firing its planet-shattering beam.

Starkiller Base absorbing the sun.

The battle at Starkiller Base in The Force Awakens

Starkiller Base collapsing separates Kylo Ren and Rey during their duel.

The destruction of Starkiller Base. 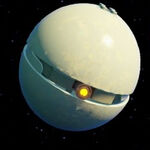