2008-present
Stefanie Noelle Scott is an American actress and singer. In the television industry, Scott portrayed Lexi Reed on Disney Channel's A.N.T. Farm from 2011 to 2014. Scott was the voices of Briana and Emma on the Disney Junior animated TV series Special Agent Oso.

Her other Disney roles include Julianne in the 2012 Disney Channel Original Movie Frenemies, Moppet Girl in Wreck-It Ralph, and herself in the Disney 365 mini-series episode "Dare to Dream". She also appeared in the 2011 TV movie Disney's Friends for Change Games. She even guest starred on Jessie as Maybelle on the episode "Hoedown Showdown". 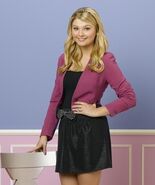 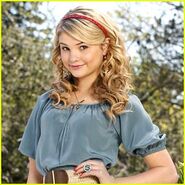 Julianne Bryan
(Frenemies)
Add a photo to this gallery

Stefanie Scott at premiere of Wreck-It Ralph in October 2012.

Stefanie Scott attending the 2014 Nickelodeon Kids' Choice Awards.
Add a photo to this gallery
Retrieved from "https://disney.fandom.com/wiki/Stefanie_Scott?oldid=4004489"
Community content is available under CC-BY-SA unless otherwise noted.