Deceased
Stegosaurus is a dinosaur that lived approximately 165-136 million years ago, mainly during the Late Jurassic Period. It is the largest and most famous known member of the Stegosaurs, an aptly-named race of armored dinosaurs known for their body plates and spikes. It is a character of Fantasia, appearing in the "Rite of Spring" segment.

Later, other Stegosaurus appear in the group of dinosaurs marching through the drought. Some are trapped in a muddy pit with Apatosaurus and Diplodocus then they are killed by heat exhaustion and attacked by a group of desperately hungry Ceratosaurus.

A Stegosaurus also appears in The Little Mermaid episode "Land of the Dinosaurs" along with Apatosaurus, Triceratops, and Tyrannosaurus rex.

A Stegosaurus is about to look at the arrival of the Tyrannosaurus rex.

A fight to the death! 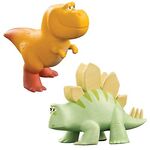 A Stegosaurus and other Dinosaurs with Goofy's face.

A skeleton of Stegosaurus at the American Museum of Natural History, New York, NY