Stephanie Beatriz Bischoff Alvizuri is an Argentine-born American actress and voice actress, who is best known for playing Detective Rosa Diaz in the Fox/NBC sitcom Brooklyn Nine-Nine from 2013 to 2021 and Jessica in the 2013 independent drama film, Short Term 12. She also voiced Gertie in Ice Age: Collision Course, La Tormenta/Blanca Guzman in The Casagrandes, and Sweet Mayhem in The LEGO Movie 2: The Second Part. In addition, she portrayed Carla in In the Heights.

For Disney, she played Salma Espinosa in the Jessie episode "Toy Con". She also voiced Ixlan in Elena of Avalor, Gosalyn Mallard in the DuckTales reboot, and Mirabel Madrigal in the 2021 Disney animated feature film, Encanto.

Stephanie Beatriz at the 2014 Alma Awards. 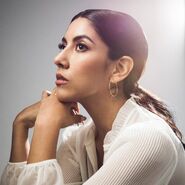