Disney Wiki
Register
Don't have an account?
Sign In
Advertisement
in: People, 1960s births, People from New York,
and 5 more

Alaia and Hailey
Stephen Andrew Baldwin is an American actor and producer and the youngest of the four Baldwin brothers. He is known for his roles in films, such as Michael McManus in The Usual Suspects, Doyle "Stubs" Johnson in Biodome, and Barney Rubble in The Flintstones in Viva Rock Vegas.

For Disney, he played Danny Morgan in the 1992 Touchstone Pictures film, Crossing the Bridge and Tanny Newland in 1994's A Simple Twist of Fate.

Stephen Baldwin with his brothers: William, Alec, and Daniel in May 2008. 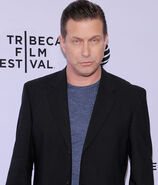