Stephen Root is an American actor and voice actor. Some of his most notable roles are Jimmy James on the NBC sitcom, NewsRadio, Milton Waddams in Office Space and for voicing Bill Dauterive and Buck Strickland in the animated sitcom, King of the Hill.

His Disney roles include Zeb in The Country Bears, Bubbles in Finding Nemo, Finding Nemo Submarine Voyage, and Finding Dory, a talent scout in The Fox and the Hound 2, Sheriff and Sentry #2 in Buzz Lightyear of Star Command, Mayor Toadstool in Amphibia, Theodore Roosevelt in The Legend of Tarzan, Mr. Andrews in The Proud Family, Santa Claus in Brandy & Mr. Whiskers, Cowboy Gambler in Kim Possible Movie: So the Drama, additional voices in Kim Possible, the Junior Woodchucks Guidebook in DuckTales, and Bud Gleeful and additional voices in Gravity Falls. He also portrays Mickey in V.I. Warshawski, Habberman in The Lone Ranger, Sheriff Bobby Clinton in The Torkelsons, Gerald Adams in Krippendorf's Tribe, Greenie in the Miramax Films film Jersey Girl, and Arthur Parson in the Fox film The Empty Man. 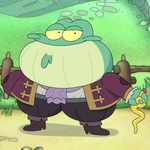 Stephen Root attending the 2020 Sundance Film Fest.
Add a photo to this gallery
Retrieved from "https://disney.fandom.com/wiki/Stephen_Root?oldid=4149641"
Community content is available under CC-BY-SA unless otherwise noted.