Sterling Price Holloway, Jr. was an American actor and voice actor. Most notably, he was the original voice of Winnie the Pooh, as well as the Cheshire Cat from Alice in Wonderland, Kaa from The Jungle Book, and Roquefort from The Aristocats. He was the narrator of cartoon shorts: The Pelican and the Snipe, Goliath II, Susie the Little Blue Coupe, The Little House, The Cold-Blooded Penguin segment of The Three Caballeros, and the Peter and the Wolf segment from Make Mine Music, as well as Mickey and the Beanstalk, as seen in the Disneyland episode, "The Adventures of Mickey Mouse". He voiced Mr. Stork from Dumbo, and the adult version of Flower from Bambi. He played Amos Mouse, the lead character and narrator from Ben and Me, and he reprised his role as Mr. Stork as the narrator of Lambert the Sheepish Lion.

Sterling said that the role of Winnie the Pooh was his favorite role that he did for Disney. In addition to his work as a voice actor with his distinctive high-pitched voice, Holloway was also a movie and stage actor and appeared in movies such as Meet John Doe (1941) and It's A Mad, Mad, Mad, Mad World (1963). He also appeared in a few Gene Autry movies and he also appeared on television in The Andy Griffith Show, A Family Affair, and Gilligan's Island.

Holloway was awarded the Disney Legend of 1991.[1] He was escorted by the character of Pooh himself to receive the award. Sterling Holloway died on November 22, 1992 at the age of 87 from cardiac arrest. He was never married but did adopt a son named Richard Holloway who survived him. Following Sterling's death, Jim Cummings took over many of his characters for Disney.

Amos
(Ben and Me) 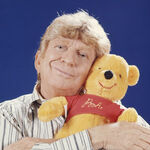