Sterling Kelby Brown is an American actor and voice actor. He made his breakthrough in 2016 when he portrayed prosecutor Christopher Darden in the first season of the FX anthology series American Crime Story, subtitled The People v. O. J. Simpson. In the same year, he began starring as Randall Pearson in the NBC drama series This Is Us. He also voiced Garry in The Angry Birds Movie 2.

For Disney, he played N'Jobu in Black Panther, and voiced Lieutenant Mattias in the 2019 animated film, Frozen II.

He also narrates the Disney+ Documentary series, One Day at Disney. 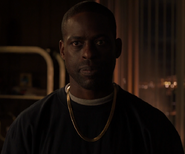 Lieutenant Mattias
(Frozen II)
Add a photo to this gallery

Sterling K. Brown poses in the press room at the 68th annual Emmy Awards in September 2016.

Sterling K. Brown at premiere of Black Panther in January 2018.

Sterling K. Brown at premiere of Frozen II in November 2019.

Sterling K. Brown speaks at the This is Us panel at the 2020 Winter TCA Tour.
Add a photo to this gallery

Retrieved from "https://disney.fandom.com/wiki/Sterling_K._Brown?oldid=3999378"
Community content is available under CC-BY-SA unless otherwise noted.