Lisa, Reed, Erin, and Eve Jobs
Steven Paul "Steve" Jobs was an American businessman and technology visionary, who was best known as the co-founder, chairman, and chief executive officer of Apple Inc. He also co-founded and served as chief executive of Pixar Animation Studios after acquiring it from Lucasfilm's computer graphics division for the price of $10 million in 1986. He was also credited as executive producer of the 1995 Disney/Pixar film, Toy Story. In 2006, Pixar was acquired by the Walt Disney Company in an all-stock transaction worth $7.4 billion. Jobs, owning 50.1% of Pixar stock, thereby became the Walt Disney Company's largest individual shareholder, owning 7% of the company, and was appointed to the Walt Disney Company Board of Directors, a position he held until his death. Following Jobs' death from pancreatic cancer on October 5, 2011, his shares were transferred to the Steven P. Jobs Trust, controlled by his widow, Laurene Powell Jobs. Steve Jobs was diagnosed with Pancreatic Cancer in 2003 and passed away 8 years later in 2011. He was mentioned in the Andi Mack episode Home Away From Home.

He was posthumously named a Disney Legend in 2013, John Lasseter accepted the award on his behalf. 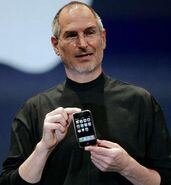 Steve Jobs presenting an iPhone at the 2010 Worldwide Developers Conference.