Gets Beaten Up by Tracy and Handcuffed

"What'd you get?"
"Let's see the stuff"
"That's all?"
Steve the Tramp is a goon who once abused the Kid and kept him as his slave in Dick Tracy.

Steve was living in a shelter awaiting the Kid's return. He came back with a wristwatch he stole from a chef. Though Steve seems amused to have a possession in his hand, he shoves the Kid to a wall until Dick Tracy shows up and engages in a fist fight with him. Despite being taller than Tracy, the latter wins by knocking him out with a sucker punch and then progresses to send Steve in jail. 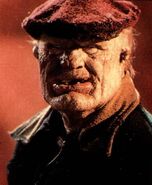 Retrieved from "https://disney.fandom.com/wiki/Steve_the_Tramp?oldid=4048828"
Community content is available under CC-BY-SA unless otherwise noted.