Stevie has light brown hair and dark green eyes. He also has a moss-green tail and fins. He wears a shark-tooth in a necklace around his neck, he is also shown to be somewhat muscular, maybe because he's a merman and has muscles do to the swimming.

His name is mentioned in a scene when the girls wake Ariel up. When Aquata ask Ariel if she was out because of a boy, Adella says that she's two years older than Ariel and that Stevie is the only boy she's gotten close to kissing. However, Andrina calls him "Squid-lip Stevie" but Adella corrects her and says that it was only a dare.

He is first seen when King Triton and his daughters do the morning ritual. As King Triton approaches, he and another blue-tailed merboy get out of the way to let them pass. They put their arms behind their back and bow down to them. Adella is seen nervously looking at him when Ariel breaks a piece of sea-weed. The sea-weed tickles Ariel's throat. He is seen smiling at Adella. Adella touches her hair and they both smile. Ariel notices and decides to tickle her sister. Adella overreacts and his smile fades into disappointment.

During "I Will Sing", Adella taps his right shoulder,and he turns. As he turns back again, Adella leans in for a kiss. Behind Adella, a mermaid gets mad after he cheers for the kiss. Apparently she liked him as well.

Lastly he is seen after Ariel offers Triton a dance, Aquata starts dancing and everyone follows her lead. Stevie is seen dancing between Arista, in front of him, and Adella behind him. 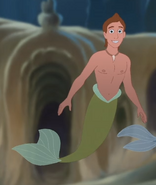