Disney Wiki
Register
Don't have an account?
Sign In
Advertisement
in: Article of the week, Former Magic Kingdom attractions, Tomorrowland attractions,
and 9 more

5 (3 pre-show figures and 2 Stitch figures, one for each theater)

Stitch's Great Escape! was a Tomorrowland attraction at the Magic Kingdom theme park within the Walt Disney World Resort. It was a "theater-in-the-round" experience starring the titular alien from Walt Disney Animation Studios' 2002 film Lilo & Stitch. It opened November 16, 2004, and is the fourth attraction to occupy the site in Tomorrowland. Many of the animators who worked on Lilo & Stitch partnered with Walt Disney Imagineering for Stitch's Great Escape! The attraction is a replacement of the ExtraTERRORestrial Alien Encounter, which formerly occupied the building the attraction is housed in. The attraction notably struggled with somewhat mixed reception throughout its existence.

On September 21, 2016, it was announced that the attraction would be switching from a daily operated attraction to a seasonally operated one, depending on attendance, starting October 2, 2016.[3] From October 2, 2017 onwards, the ride's first pre-show room is turned into a Stitch meet-and-greet called "Stitch's Alien Encounter Character Greeting!".[4][5]

The attraction last operated on January 6, 2018,[1] which soon led to much speculation over the fate of the attraction. Eventually, Disney officials confirmed in a memo sent to cast members on July 16, 2020 that the attraction, along with Primeval Whirl and Rivers of Light in Disney's Animal Kingdom, was permanently closed,[2] with the attraction's signage later taken down on August 10, 2020.[6]

The experience, set before the first film, takes place in the Galactic Federation Prisoner Teleport Center. Guests have been recruited by the Grand Councilwoman to be guards for the Galactic Federation. After being taught the basic procedures of guard duty and the classification of prisoner hazard levels by a robot sergeant (and a brief, but comical, reprisal of Skippy from the ExtraTERRORestrial Alien Encounter), Captain Gantu gives an alert of a Level 3 prisoner being beamed to the Center. Guests are then instructed by Pleakley over an intercom communicator (off-camera) to proceed to the Level 3 prisoner teleportation chamber.

After being seated in the chamber, shoulder restraints (made to resemble scanning units for DNA) come down onto the guests' shoulders and the prisoner is then beamed into the chamber via a large plume of smoke and is revealed to be an enlarged Stitch. After a brief period of puzzled talking by Gantu and his two assistants, Stitch uses the flaws of the armed laser cannons (the cannons follow and destroy any genetic material, including saliva) and disables all power to escape, causing mass (happy) chaos in the crowd. During this period, hydraulic pumps and small hoses in the shoulder restraints make it seem as if Stitch is jumping on guests' shoulders and tickling their heads. When the power comes back on, the laser cannons continue their attempt to bring Stitch down. Again, using the cannons' fatal flaws, he manages to fire the laser cannons into the crowd. Shortly after using the diversion, he escapes to Florida's Walt Disney World Resort. Cameras capture him traversing Cinderella Castle before licking the camera lens. The audience is then released from their duty and exits into one of two gift shops—Merchant of Venus or Mickey's Star Traders.

The attraction includes much of the technology and sets from its predecessor, the ExtraTERRORestrial Alien Encounter, including the comical alien Skippy in the preshow area.[7] The 39-inch Audio-Animatronic Stitch figure built by Imagineering reportedly is one of the most complex creations of its size. Other special effects include binaural sound, simulated laser cannons and a pungent smell (that of a chili dog, which lampoons the rule about bringing food and drink into the theater).

Promotional photo of Stitch in the show theater

Promotional photo of the show

A close up of Stitch in the attraction

Stitch as he appears in the attraction 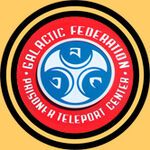 The first pre-show room; the space is also converted into a meet-and-greet area when the attraction isn't operating

The scraped for parts Stitch Animatronic following the ride's closure