Colossus of Corinth
Hero of Heliopolis

God of Strength and Heroes

Hades (uncle)
Storkules is a character in the DuckTales reboot. He is the son of Zeus and an old friend/acquaintance of Donald Duck.

Storkules is a big friendly pure-hearted Greek stork who met the McDucks during their visit to Ithaquack. In "The Spear of Selene!", Storkules tackles Donald when greeting him, Louie, and Huey. When he asks where Della Duck is, he is quick to understand that Della is no longer with them, so he gives his sympathies to Donald. Upon hearing that Donald has no adventure left in him he gets Zeus to throw a beach party. Later, Zeus has him and Scrooge McDuck's nephews engage in a series of challenges.

In the first trial, Huey wins by being blown to the finish line, and in the second trial, they toss disks which Donald won. Following a chariot race and a crafting contest (in which Storkules built a muscular, naked version of Donald) they enter the last challenge, where they must steal the Golden Fleece from a child. Storkules needs help but Donald is done with adventure because someone always gets hurt. Pacing in circles, he is not sure to steal the fleece from a child. Little does he know that the child is a siren who then controls him by her singing to eliminate Scrooge, Huey, and Louie. When Donald hears them crying for help, he fights back against Storkules. While Storkules and Donald fight, Louie comes up to the siren saying her voice could make Scrooge and him rich and makes a deal, and Storkules is freed from her singing as he rolls on the ground and hugging Donald. After Scrooge drops a gray ball to let Zeus finally win, Storkules then tells Donald that he may be done with adventure but it will never be done with him. To Storkules' pleasure, Donald accepts him as a friend, which causes Storkules to enthusiastically hug the duck.

As of "Storkules in Duckburg!", he currently lives in Duckburg after being kicked out of Ithaquack by his father.

He soon returned in "New Gods on the Block!". 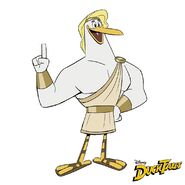