Louie presents to Scrooge McDuck his potential business company, Louie Inc., and appeals to him for investing it. Scrooge, who is dubious since Louie hasn't figured out what his business is about yet, urges him to find a problem and solution before he makes money. Elsewhere, Donald is renting out the spare room in his houseboat in light of the city's housing shortage. Donald is suddenly surprised by Storkules' appearance, since he is the client for the room, to Donald's chagrin. Storkules explains that he was kicked out by his father, Zeus, who cast a swarm of Harpies out when Storkules' lute-playing grew irritating for Zeus. Storkules decided to seek Donald out for how to be responsible. After Storkules accidentally destroys some of Donald's kitchen while cooking breakfast, Donald lays down ground rules for his roommate and sends him to find a job to pay rent. Just then, they overhear the cries of Harpies after Storkules, prompting Storkules to battle them.

After consulting with the Junior Woodchucks guide on Harpies (before it is stolen by a Harpy), Huey learns Harpies steal the thing one loves most. The group then set out to capture the Harpies. Soon, their business becomes a booming success, while the Harpies captured are stored away inside Donald's houseboat behind his back. Eventually, Storkules captures all the Harpies, causing Louie to panic since no more Harpies means their business is void. Huey asks for payment to resolve the business but Louie admits he spent the money they earned on making merchandise. This angers Huey and Storkules grieves over failing his responsibility to Donald. Louie sneaks onto the houseboat to let the Harpies out and save the business before he is caught by Storkules. However, the Harpies begin screeching more, and the noise wakes up Donald who notices the Harpies. Louie claims they are Storkules' pets, but this incites Donald to force Storkules out on his policy of no pets and he lets the Harpies out.

The Harpies circle the houseboat as the others are woken up by the racket. When Storkules slips that their friendship is the thing he loves most, the Harpies overhear this, and they take the houseboat and Donald hostage. Louie accepts responsibility for causing the problem, and Storkules carries Louie with him up to the houseboat to rescue Donald. Once Storkules saves Donald from falling, some of Louie's merchandise is tossed that catch the Harpies' attention, so the group tosses them overboard to satisfy the Harpies. Donald agrees to help Storkules find a place in Duckburg, which delights Storkules but quickly recomposes himself with respect to Donald's boundaries.

After Scrooge returns from a business trip to Cape Suzette, Scrooge reveals he took one of Louie's ideas to invest in a temporary lemonade drink without an effective transport method for the lemons at Cape Suzette. When Webby shows off her training on the Harpies and their love for lemons, Louie employs the Harpies to squeeze and deliver Scrooge's lemonade and makes it an instant success as covered on the news. However, a Harpy then steals the lemonade, to which Louie sheepishly states they are working on that. 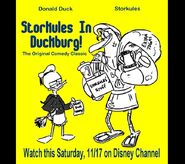