Storm from the Marvel Comics

Field leader of the X-Men

Storm (real name Ororo Munroe) is a mutant with the ability to control the weather and the field leader of the X-Men. She appears in Marvel Disk Wars: The Avengers.

Storm was created by Len Wein and Dave Cockrum.

Storm is a white-haired Black woman with a matching eye color. She wears very revealing forms.

Storm, along with a few other members of the X-Men appear in a brief cameo. They can be seen conversing in another room, while Wade is in the X-Mansion, complaining the studio hasn't allowed them to bring in one of the more well-known members of the team.

In the episode "Electro", a Daily Bugle news crawl mentions that Storm has been quoted as saying she had nothing to do with Electro's lightning attacks on New York City.

Storm is a mutant with powers to control the weather and all of its elements included, such as wind, ice, fog, and lightning. She is one of the strongest mutants to ever appear in the franchise, but she still has her powers in training. 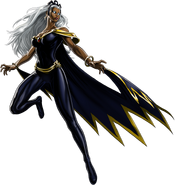