Start a Wiki
The Storm Blot was originally the true enemy of the game of Epic Mickey before it was scrapped. If you look at the picture to the right you can see that it's actually Oswald the Lucky Rabbit as the Shadow Blot. From what is known, Oswald actually sided with the Blot (known then as the Phantom Blot) to get revenge on Mickey Mouse. The Blot somewhat possessed Oswald, though the rabbit was willing to do this in order to achieve this new power. Mickey had to call out to Oswald to stop being a pawn in the Blot's plan and redeem himself. This, however, was scrapped in favour of making Oswald a main deuteragonist. 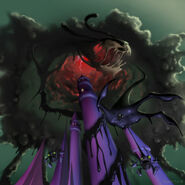 Retrieved from "https://disney.fandom.com/wiki/Storm_Blot?oldid=3746188"
Community content is available under CC-BY-SA unless otherwise noted.