Strigoi[1] are magical creatures of Romanian mythology. The ones featured here appear in American Dragon: Jake Long. They are, basically, vampires who must feed on Dragon blood in order to survive. Which as a race makes them expert dragon slayers.

Jake encountered four individuals which were described as Strigoi. Queen Liliana and three of her sons were accomplished enough with their skills they had been traveling the globe stalking and slaying World Dragons. Finally traveling to New York, they had their sights set upon the American Dragon.[2]

Strigoi are tall human-like creatures with sharp fangs for teeth. Their skin is paler than normal humans and they have natural carrot-red hair. When in a rage or getting ready for the kill, their nails and fangs will grow longer, sharper, and deadlier.

Strigoi in general are much stronger and more agile than humans. Their fangs are able to pierce through Dragon scales so they can drink the blood of their victims with ease. Being a type of vampire, they have no reflections and cannot live under the sun for an extended amount of time without taking precautions and have their fill of dragon blood.

Only the most powerful of Strigoi, such as Queen Liliana, have psychic visions permitting them to pinpoint the location of the nearest dragon.

When running low on energy, the Strigoi will become less and less tolerable toward sunlight. Also, in the case of an aged Strigoi like Queen Liliana, they will become steadily weaker and lethargic until e ultimately unable to go about their daily activities without nodding off.

To defeat a Strigoi, one must expose it directly to sunlight or use an "instant sunshine" material such as 'solar sand' as a substitute. Unlike regular vampires, using garlic or stabbing a stake through the heart will not destroy it. The effects of fire and holy weapons are unknown. 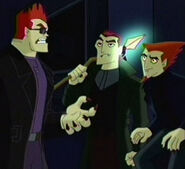 Strigoi shielding themselves from the sun