Studio Tram Tour: Behind the Magic

As part of the park's major expansion, much of the Tram Tour is to be removed for the new lands. Catastrophe Canyon is to be retained and incorporated into a new abridged Cars-based attraction, Cars: Route 66 Road Trip.[1]

Guests entered the attraction via the Hollywood Boulevard section of the park, under a false facade of the Hollywood sign. The tram ride portion of the attraction featured highlights such as the Catastrophe Canyon scene and a look into the set of London in ruins from the film Reign of Fire. In the Catastrophe Canyon scene, the tram stopped when rain started pouring down, followed by an earthquake and then fire occurring across the scene. Afterwards, a flood came down and extinguished the fire, causing the tram to continue the tour. In the Reign of Fire scene, the tram stops once again to discover what it is like there where the fire effects are used just before the tram comes to a complete stop.

Until 2009, the Tram Tour used to pass through the costume workshop, but this part was removed due to the upcoming expansions to Walt Disney Studios. Imagineers wanted to create a studio tour at the Walt Disney Studios Park based on the existing tour at Disney's Hollywood Studios, where the tour was once the park's signature attraction.

The voiceovers were done mainly by Jeremy Irons and Irène Jacob via bilingual video who explain to guests of how movies are made using sets, costumes, props, etc. and how special effects are used in movies. At the end of the attraction, Irène Jacob and Jeremy Irons bid guests a farewell during the conclusion of the tour, along with cameos of international celebrities bidding farewells in their native languages such as Isabella Rossellini (Italian), Nastassja Kinski (German), Inés Sastre (Spanish), and Famke Janssen (Dutch). 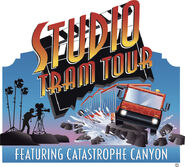 Reign Of Fire setpiece
Add a photo to this gallery

Retrieved from "https://disney.fandom.com/wiki/Studio_Tram_Tour:_Behind_the_Magic?oldid=4142077"
Community content is available under CC-BY-SA unless otherwise noted.