Stuff & Thang is the Bog King's minions of the Dark Forest in the 2015 film Strange Magic. They voiced by Bob Einstein (Stuff), and Peter Stormare (Thang)

These two are henchmen to the Bog King. When Marianne accidentally flies into the dark forest Stuff and Thang discover that she was carrying a primrose petal. They quickly inform their King who tells them to destroy the remaining primroses to end the creation of love potions. The minions successfully destroyed most of the primroses, but one petal was hidden by Sunny the elf. When the elf enter the forest, in search for the Sugar Plum Fairy, Stuff receives a message from the mushrooms and passes it along to Thang. Thang was hesitant to give the Bog King the news, but Stuff tricked him into announcing the miscommunicated message embarrassing himself and angering the King. Stuff and Thang are constantly annoying the Bog King. They talk too much and baby him when they think he needs their help. And they are constantly incompetent when it comes to important matters, like the King leaving his weapon behind, or an army approaching the castle. Although the two are ugly scaley monsters they are actually quite kind hearted and playful. And although Stuff is voiced by Bob Einstein it is later revealed that Stuff is in fact a female troll. 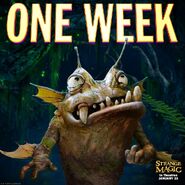 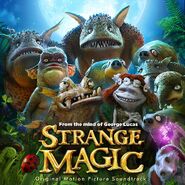 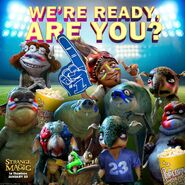 Add a photo to this gallery
Retrieved from "https://disney.fandom.com/wiki/Stuff_%26_Thang?oldid=3951639"
Community content is available under CC-BY-SA unless otherwise noted.