The Submarine Voyage was created to remove the extremely unreliable Phantom Boats at Tomorrowland. Unfortunately, to construct it, the less-than-one-year-old Viewliner had its track in the way of where the subs needed to be. So, it was also removed as well, making it the shortest-lived ride in Disneyland history.

When the original subs opened in 1959, due to the Cold War, they were painted a stark gray and were dubbed nuclear subs. These were the "largest fun time fleet of submarines in the world."

Once the Cold War began winding down, the subs closed for a makeover into Explorer subs, which gave them a highly recognizable yellow paint job.

In the summer of 1985, female cast members got dressed up in mermaid outfits and swam alongside the subs. Also, at one given point per day, they would serenade. This whole feature was discontinued for many reasons, primarily dangers to the swimmers because the subs used real motors, the swimmers' hair being bleached by the chlorine, and wily male guests pitching money to them (either from the walkways or from the Skyway) and diving into the lagoon to flirt with them (the last reason was referenced in a video for Disneyland's 50th anniversary featuring Steve Martin and Donald Duck, the latter doing just so before getting grabbed by an octopus).

On September 9, 1998, the Submarine Voyage was closed due to its age, low hourly capacity, aged effects, and high maintenance and labor costs. A decommissioning ceremony was held, where the attraction's flag was lowered for the last time and presented to Donald Duck. Then-president of Disneyland, Paul Pressler, promised a new attraction in 2003.

The new ride was to have been based on Atlantis: The Lost Empire, which was in development at the time and would see guests being able to use levers that operate nets to scoop up treasure lining the caverns. Another proposal was for a Little Mermaid-based attraction.

Ultimately, though, Atlantis bombed at the box office, and all that ever came of the planned ride was a meet-and-greet spot in front of the lagoon with Milo Thatch and Kida Nedakh. The subs themselves remained moored at the dock until 2000 when they were moved into the show-building to be stored until the new attraction was ready. The lagoon sat dormant for several years afterwards serving as nothing more than scenery. It was painfully obvious, though, even to little kids, that this was a defunct attraction, since the dock and underwater track were still in place, and the waterfalls were still active. The subs were left to rot in the show building, and without proper maintenance, the underwater figures suffered as well.

The ride began with the sub diving into the depths of the Lagoon, where guests saw various sea creatures. Examples of these forms of life included giant sea bass, sea turtles, fighting lobsters, giant clams, thousands of algae, and a shark fighting an octopus.

The subs were transitioned into the building by a cascade of bubbles, simulating diving. After the "dive", they found an underwater boneyard known as "The Graveyard of Lost Ships" which held the remains of ships from the time of the Ancient Greeks to more recent Viking boats.

Two divers were seen trying to recover lost treasure from these ships as they were circled by sharks. The sub reached the North Pole and dove beneath the polar ice caps to where the sun has never penetrated, where it finds a giant squid and other mysterious creatures. The sub ascended to find mermaids (these were Audio-Animatronics) and the lost continent of Atlantis. The subs explored the lost ruins, until the underwater volcanoes started to erupt, making the subhead toward the surface. On the way back to the port the sonar found a strange reading. The riders saw a cross-eyed, comical-looking sea serpent, which convinced the captain he had been under the sea too long and he demanded the riders return to the port. The subs then exited the building into the Lagoon, where they returned to port to let guests on and off the attraction.

In 2003, former Disney Cruise Line president Matt Ouimet became president of the Disneyland Resort and sought out to fix the Pressler-era "improvements". Among the Tomorrowland projects were a full refurbishment for Space Mountain; repainting Tomorrowland in blue, silver and white; repairing the long-malfunctioning Observatron (the former Rocket Jets) and putting something new in the Rocket Rods queue/former World Premiere Circle-Vision facility. The most notable of these projects, however, came to the Submarine Lagoon.

In October 2004, a new activity was noticed in the Lagoon. Neptune, one of the eight subs, moved under its own power for the first time since 2000 and was moored at the dock. A large blue box was erected and a banner stating that a new ride was being Imagineered was hung on said box. It was reported that park and Pixar officials were on hand to test new projection box technologies. By the end of the month, Neptune was back in storage.

The Submarine Lagoon was suddenly drained in April 2005 (along with the old Motor Boat Cruise canals), exposing the fading rock work and underwater figures. Walls went up around the lagoon, announcing that the Submarine Voyage would return as the Finding Nemo Submarine Voyage. The old figures were auctioned off, though at least one (the sea bass in the outdoor portion of the ride) was retained.

The new ride uses the original eight submarines, now refurbished and operating on batteries instead of diesel; the elimination of the old diesel engines allowed each sub's capacity to be increased from 38 to 40. Projection boxes are scattered throughout the show building and show the characters on an adventure to find Nemo once again. 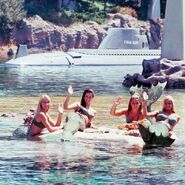 Live Mermaids on the rocks 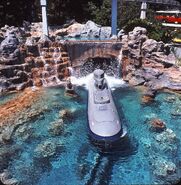 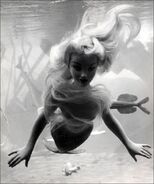